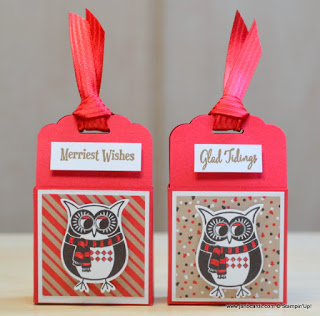 I know the name’s are not very imaginative, but today I
uploaded my video called Wendy’s Treat Box.

If you watched my video
where I shared my swaps from Telford earlier this month, you may recall that I
show two small treat boxes that looked very similar but I said they’d been made
quite differently.

Next Wednesday I’ll show you the second box which I’ll probably call Maria’s Treat Box
Today’s box has been made as
a box, that is, with flaps and tabs.

I made it quite a bit larger than Wendy’s
swap for two reasons.

Firstly because it would be easier to demonstrate and
easier to be seen.

Secondly, I still have a lot of chocolates left over from
those I bought for my Telford swaps. 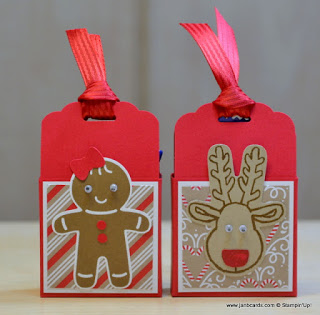 But I was amazingly well disciplined and finished up with lots leftover!

All my boxes were the same
except I used different designs from the Candy Cane Lane Designer Series Paper
(DSP) and I varied the images. 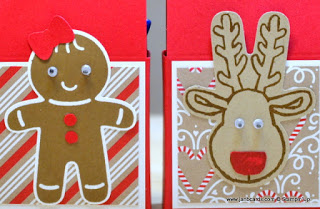 Photographs 1 & 2 – the penguin
is the image I used in the video and is from the hostess stamp set called Cozy
Critters. It’s the only image I used a sentiment with because I felt it needed
something extra as the owl fitted inside the square of DSP! I stamped him on a piece
of Whisper White Cardstock (CS) using Basic Black Archival Ink, and coloured in
the diamonds on his “sweater”, his scarf and his eyelids using a Real Red
Marker Pen. I used the Owl Builder punch to punch him out. 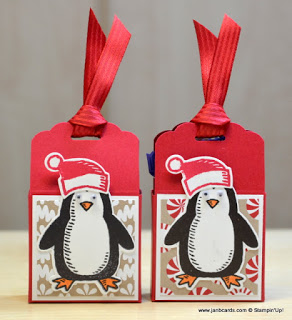 Photograph 3 & 4 – the reindeer
is from the Cookie Cutter Christmas Stamp Set. I stamped him on a piece of
Crumb Cake CS using Soft Suede Ink and punched him out with the Cookie Cutter
Punch. I also stamped his nose on a scrap of Real Red CS, which I cut out by
hand and adhered in place with Tombow. I also adhered two non-Stampin’ Up
googly eyes to him as well. When I put Tombow on the back of the image to
adhere to the box, I only put it on as far as the start of his horns. 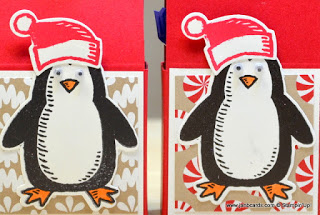 Photograph 3 & 4 – the gingerbread
girl is also from the Cookie Cutter Christmas Stamp Set. I stamped her in Soft
Suede Ink on Whisper White CS, and then punched her out using the Cookie Cutter
Punch. Using a scrap of Read Red CS, I punched out a bow tie for a hair bow and
two buttons for her top. 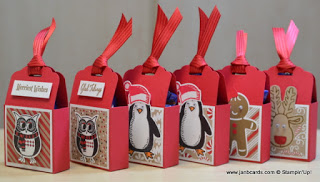 I adhered these
pieces in place with Tombow. Unfortunately, this was the first image I’d made
and I glued it all down onto the box! I decided I didn’t like the head glued right
back partly because you can’t really see her hair bow!

Photograph 5 & 6 – the penguin
is from the Snow Place Stamp Set which was brought forward from last year. 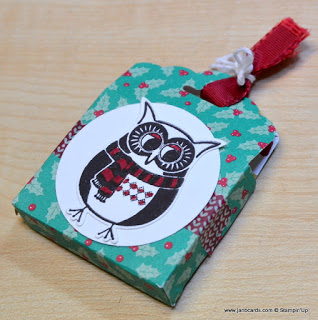 I stamped the penguin using
Basic Black Archival Ink and I also stamped the hat from the stamp set using
Real Red Ink. This set has a coordinating set of dies called Snow Friends
Framelits, so I was able to die cut the two pieces but they would have been quite
easy to cut out by hand if I didn’t have the dies. I used my Pumpkin Pie Marker
Pen to paint his beak and his feet, and my final touch was to add some googly
eyes!

Photograph 7 – line up of all six boxes – ready to sell at my last craft show of the year
which will be next Thursday, 1st December 2016!

Photograph 8 – this is the swap I received from Wendy Porter. Many thanks, Wendy.

That’s about it for today. I hope you have a very happy Sunday. Until tomorrow, happy crafting.