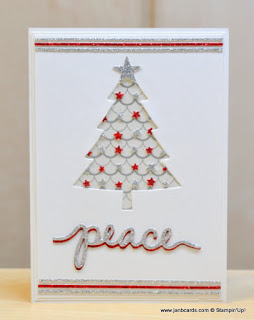 For
today’s card, I had another play with the Fabulous Foil Designer
Acetate.

About three years ago, Stampin’ Up! had a Specialty Designer Series
Paper (DSP) pack which included one sheet of acetate that had a white
design on it. 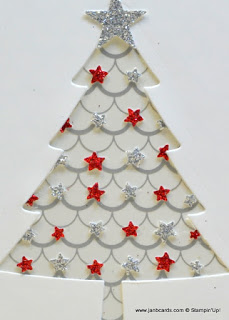 I used it to make a special order card
for my then hairdresser.

For Bella’s card, I’d die cut three Christmas trees, one in
the centre of the landscape mode card with a smaller tree on either side.

Because the design on the acetate was in white, I was able to use Garden
Green Cardstock (CS) under the die cut trees, and it made the white design really stand out!

Unfortunately, this wasn’t the case with the
current acetate, which is decorated with a gold pattern, which shows as
silver on the reverse.

Both the gold and silver are much softer than white,
and the design didn’t shine through very well with any of our green
cardstock, which is why I decided to use only Whisper White CS for today’s card!

I wasn’t sure if my card would work with a cardbase and two layers – all
in Whisper White.

I used the largest tree die from the Perfect Pines
Framelits Dies in the centre, towards the top, of the top layer.

Using
Tombow, I adhered a piece of the patterned acetate behind the tree, making sure that I
positioned the pattern of the acetate very much in the centre of the
cut out. 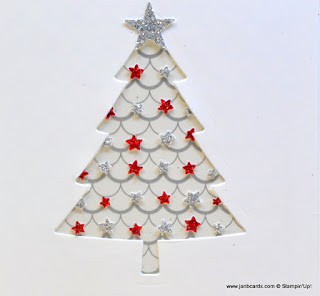 Initially,
I was just going to use stars that I’d punched out from some Red Glimmer
Paper and the Confetti Stars Border Punch.

But it didn’t take long to see this
was going to be overpowering, so I introdued some Silver Glimmer Paper
stars.

I started alternating the colours and used two sizes of stars, and slowly,
slowly the design started to take shape!

I used a retired Star Punch for the
big star on the top of the tree. 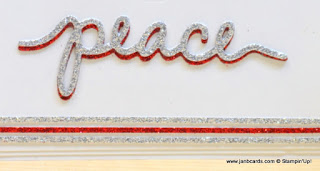 For the sentiment I chose Peace, because  the size looked in proportion with the tree. I die cut it in Silver Glimmer Paper but felt there was something missing!

Just for once I couldn’t decide what it was, nor what I needed to do to correct!

I
walked away from it for a cup of tea and some biscuits, and came back
ten minutes later feeling nicely refreshed!

I decided to try using thin
strips of Glimmer Paper top, bottom and possibly above Peace but below
the tree! 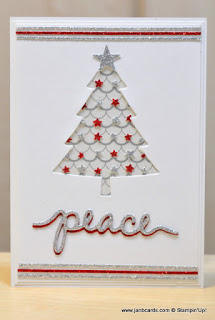 Once I’d decorated the top and bottom, I knew that was enough,
and I also knew I wanted to do a Red Glimmer Paper Peace and use it
offset under the Silver Glimmer Paper.

Then I breathed a sigh of relief
because I had reached the stage where I felt I was happy with my card!  I have to say, today’s card was
a big challenge, which I put down to my head cold!!