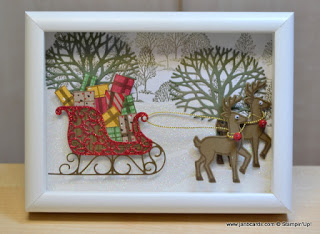 Something
a little bit different today! This is the first time I’ve tried
something like this and have to say I really enjoyed it.

I’d
bought the frame – and a few others! LOL! – quite some time ago but
never had the inclination to do anything with them. 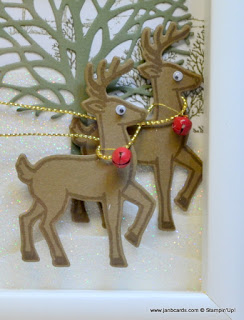 This combined stamp
set and co-ordinating dies, really comes into its own in this type of 3D
frame!

I
started with a white background which I cut from the backing cardboard of
a pack of Designer Series Paper (DSP).  Then I took a sheet of Dazzling Diamonds
Glimmer Paper and tore it by pulling the top edge towards me so I had
the torn side facing out.

I tore a second piece but only about half the
width of the first one, so I could layer them creating a snow-bank effect. 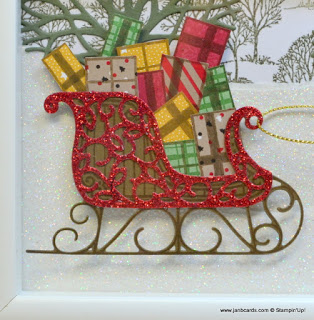 I
took the biggest piece, laid it on the white card in position and then
slide it down by about half an inch so I could lightly draw a line along
the top edge. The pencil line would be adhered behind the Glimmer
Paper and therefore I wouldn’t need to erase it.

I inked the large stamp from the Lovely
As A Tree Stamp Set with Always Artichoke Ink, and stamped it so the base
of the stamp was approximately level with my pencil mark. I lifted the
stamp and moved it upwards and to the right and stamped again. I moved
along and repeated this process further along but lower down so it fitted in
with the pencil line. 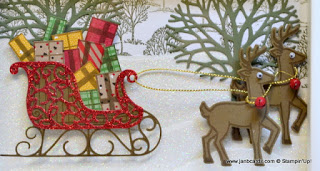 Using
Always Artichoke Cardstock (CS) I die cut two two trees from the now
retired Limited Edition Beautiful Branches Thinlits Dies and adhered
them both using Tombow so the trunks disappeared between the two layers
of the snow-banks.

Using
Soft Suede CS and Ink, I stamped and die cut two reindeer and the
sleigh. 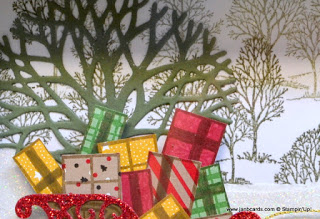 I coloured in the hooves and added a googly eye for the
reindeers – I love how the eye for the back reindeer has stuck looking in reverse! LOL!

Then I used some Gold Thread and a Mini Jingle Bell to adhere to each reindeer. I adhered the reindeer at the back using Dimensionals which I’d put a Glue
Dot on as well. I repeated this for the front reindeer but used two layers of Dimensionals. 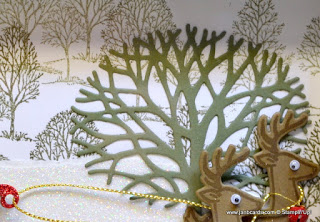 I also added another snow-bank so the reindeer didn’t look as he’s walking on air but it’s not very visible in the photograph.

I die cut the fancy part of the sleigh using Red Glimmer Paper and adhered it to actual sleigh using Tombow. I stamped the three parcels from the Santa’s Sleigh Stamp Set, onto five different desigs of DSP and cut them out by hand. 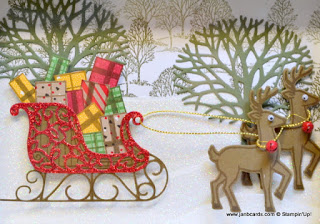 I adhered them behind the sleigh, one by one, so I could place them in a “jumbled” pile.

When I was happy with the arrangement I adhered the sleigh in place using Dimensionals with a glue Dot attached as well! The reason I add a Glue Dot to Dimensionals when I adhere to Glimmer Paper is extra security – I think Dimensionasls will hold but I just like to make sure!