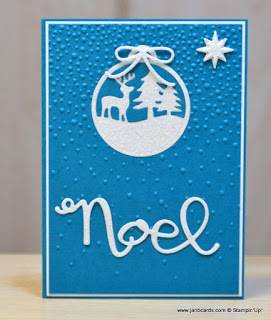 I was
looking forward to going to the launch of this year’s Christmas Craft
Fair at Foyles Book Shop in London this evening.

Unfortunately, there
was a train strike on Tuesday and Wednesday, and there’s another one
tomorrow!

The rail company have cancelled so many trains from the south
into London today, that we’re being advised not to travel unless necessary.

Unfortunately, there’ll be a knock on effect on the roads, which will
cause huge delays. 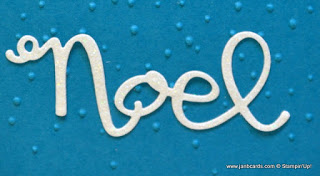 I was so looking forward to this event, and I’m
really disappointed that I’ve had to contact the organiser to let her
down!

I
decided I wanted to use a neglected colour for today’s card, and chose
Island Indigo – I know it doesn’t look like Island Indigo, but trust me, it is!!

When I started my card, the only idea I had was to use
the Merry Tags Framelits Dies. 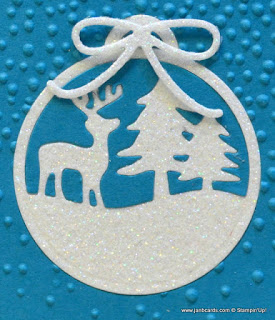 I die cut one all three of the decorated
baubles that come within the set, and tried several ways of re-arranging
the layout so I could use them all on the same card.

It didn’t take
too long to realise there were too big for this idea, even if I cut the
top loop off each one!

I
decided to work with the reindeer bauble, because it’s my favourite!

I’m always looking for something a bit different, and this time decided
to embed the bauble into the top layer. 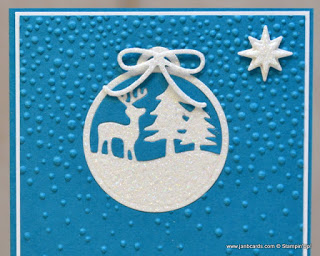 I die cut the bauble
from the top layer, put the bauble to one side for another project, and
carefully saved all the negative pieces.

If I’d known I was going to do
this when I die cut  Dazzling Diamonds Glimmer Paper bauble, I would
have kept the negative pieces so I could have done a card in reverse
with the Island Indigo bauble! 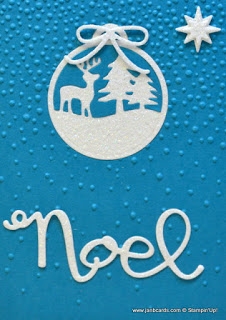 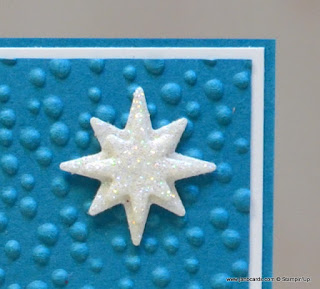 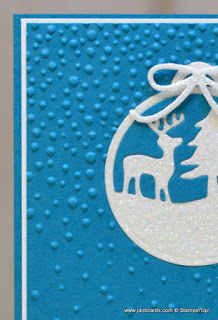 I embossed the top layer using the Softly Falling Embossing Folder, but
not the small negative pieces – I kept them plain!

I adhered all three
layers together using Tombow and adhered the Dazzling Diamonds bauble
into the bauble silhoutte.

As I was about to adhere the smallest part – the upper
piece between the two trees – it pinged out of my tweezers, across the room, never to be seen again! Grrr!!

I die cut another Island Indigo bauble,
just to get that small piece!

I
die cut NOEL from the Wonderful Wreath Framelits Dies and adhered it to
the lower half of the card using Tombow.

I also found two stars of different sizes
in my Dazzling Diamonds Ziplock bag that had been previously die cut,
but not used, from the Starlights Thinlits Dies.

I adhered them on top
of ech other, and then onto the card base, using Glue Dots.

I also found one
of the smaller bows from the Pretty Pines Thinlits Dies in the same
Ziplock bag!

That finished my card off beautifully!