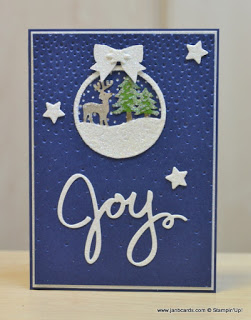 Two
years ago, I was still making my Christmas cards on 23rd December and I
said “Never again!” Ever since then, my cards have been ready by the
beginning of December!

Yesterday, I finally posted all my Christmas cards and I
said “Never again!” will I leave posting my cards so late! In future I’m
going to make sure they are all posted during the first week of
December!! 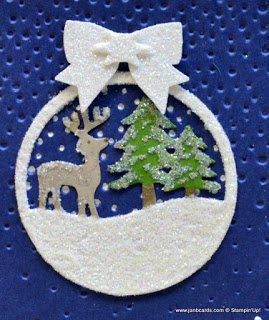 Today’s
card is very similar to yesterday’s card but has a lot more detail in
it. I die cut the reindeer bauble from the Merry Tags Framelits, using
Whisper White Cardstock (CS).

I used my Wild Wasabi Marker Pen to paint
the foliage on the trees and then the Soft Suede Marker Pen for the tree
trunks.

I chose the Crumb Cake Marker Pen to colour the reindeer and
gave him an eye and a nose using the pen end of the Soft Suede Marker
Pen!

Then I used my now-retired two-way glue pen and painted the snow
bank, the bauble frame, the tips of the branches, the antlers and part
of the reindeer’s body, and dipped it into my box of Dazzling Diamonds
Glitter. 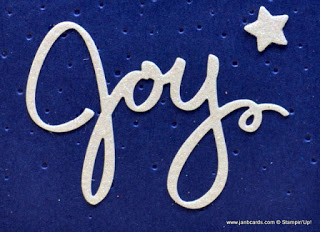 The result is quite stunning, with the snow bank looking so much like
our Dazzling Diamonds Glimmer Paper. It never fails to amaze me how
close the glitter looks to the Glimmer Paper!

To
make today’s card, I started with a card base of Night of Navy CS and
adhered a layer of the Dazzling Diamonds Glimmer Paper. 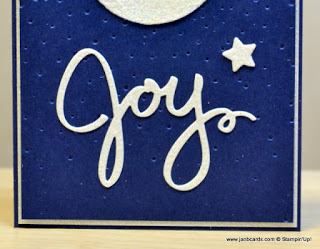 I took the top
layer of Night of Navy CS and dry embossed it with the Softly Falling
Embossing Folder.

I wanted to paint the bobbles of snow with a white gel
pen but found the shapes didn’t stay partcularly round because the pen
tended to slip off the bobble during painting!

I decided to try the debossed side instead and
this looked so much nicer! By painting into dips, it kept the pen, and
therefore the ink, controlled! 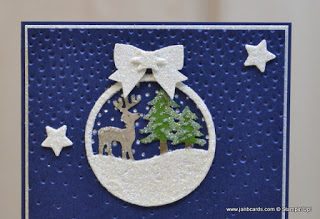 Once I was happy that I’d painted into all the visible dips within the frame of the bauble, I adhered the bauble in position over the white snow using Tombow.

I
die cut JOY, which is from the Wonderful Wreath Framelits Dies, from a piece
of Dazzling Diamonds Glimmer Paper and adhered it in position, again using
Tombow. 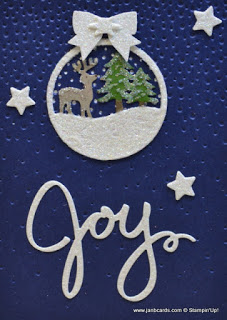 I’m not 100% certain, but I think they
were die cut using the strip of stars that’s in the Mini Treat Bag
Thinlits Dies.

I think this bow needs to be stamped and punched for it to look
it’s best. The next best look is to add an embellishment to the “knot”
of the bow.

I found a small eight-pointed star die cut from the Starlight
Thinlits Dies, and trimmed off the top and the bottom taller “spikes”, curving the cut from side to side to fit the curve of the bow.

In the absence
of better terminology, I hope you can see what I mean in the second to last photograph! 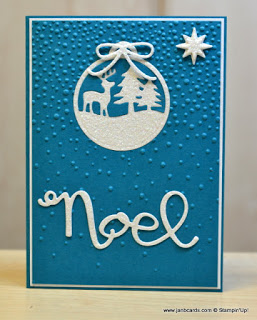 I
adhered the top Night of Navy layer to the Glimmer Paper layer using Glue Dots. I liked
yesterday’s card until I made today’s card, which has put the first one in the
shade, somewhat!

Yesterday I adjusted the lighting and re-photographed yesterday’s card to see if I could get it to look more like it’s real colour, Island Indigo!! I’m not sure it’s made any real difference!

That’s about it for now. Until tomorrow, happy crafting.