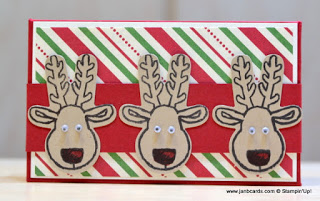 Today’s
video is a Pop Up Gift Card Box, which was inspired by Brenda Quintana – www.qbeesquest.com

I
received one as a swap when a I went to a craft day some time ago and thought what a great idea it was!

I
particularly like this idea because there’s room for a small chocolate
bar inside! 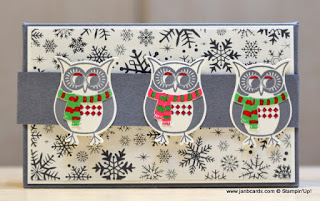 While I was making my first three test boxes, I wrapped the
belly band around the box to find where the folds should be! I really
don’t like folding cardstock without scoring first, because you never
get such a nice clean fold. 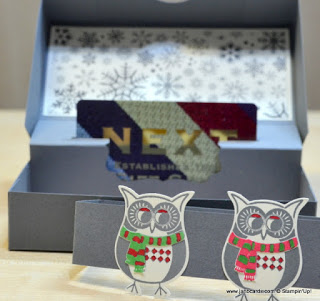 I chanced my arm for the video and explained
at the beginning that I’d worked out where to do the score lines but I
was on a wing and a prayer as to whether it would actiually work or not! I was so thrilled in the video because it worked perfectly! I now need
to go back and re-do the belly bands for the first three boxes because I
can now see how awful they look! LOL!!

Three Reindeer Box – This is the box I made in the video – the one where the belly band fits like a dream! I used the stripe design sheet from This Christmas Specialty Designer Series Paper (DSP) for this box. 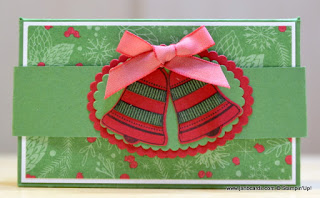 As I seem to be doing a lot this year, I added non-Stampin’ Up! googley eyes – such a fun addition!The belly band isn’t long enough to go all the way around the box. To fix that in the video, I punched a shape with the Decorative Label Punch and adheredit at the back of the box! 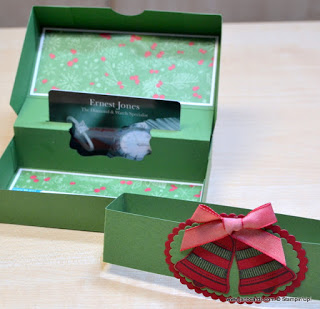 Three Cozy Critters’ Owls – I used another design from the This Christmas Specialty DSP for this box.

I stamped three owls from the hostess Cozy Christmas Stamp Set, onto a piece of Very Vanilla CS using Basic Grey Archival Ink Pad.  Before punching them out with the Owl Builder Punch, I painted the scarves, eyes and the diamond pattern on their chests using the Real Red and Cucumber Crush Marker pens.

Seasonal Bells – another design from the This Chistmas Specialty DSP – such a versatile pack of designs! 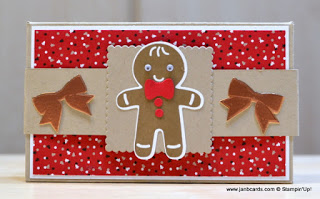 I stamped two bells from the Seasonal Bells Stamp Set on to Cherry Cobbler CS and two on Garden Green CS. I punched the red ones out with the Bell Punch and hand cut the two green strips from the other two bells. Using Tombow, I adhered the green onto the red bells. 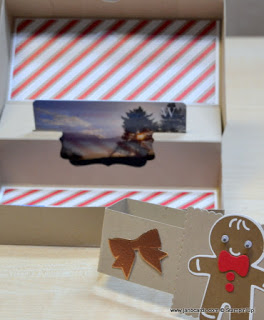 I used two scalloped dies from the Layering Ovals Framelits Dies and die cut one Cherry Cobbler oval and a smaller Garden Green oval. I adhered them together using Tombow, and then adhered them onto the belly band to hold the strip together. Finally I added the bells and the bow (made from some retired ribbon). 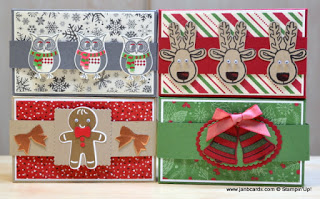 The Gingerbread Man – is the first box I made. I used a square scallop die from the Layering Square Framelits Dies to bridge the gap between the two ends of the belly band and I adhered the Gingerbread man to the square.

I’d stamped him on a piece of Whisper White CS using Soft Suede Ink and punched out a bow and two buttons from a scrap of Real Red CS. I found two Copper heat-embossed bows so I used them as my final touch. BTW the DSP I’d used for this box is called Candy Cane Lane DSP.

I wish you a very happy Sunday. Until tomorrow, happy crafting.