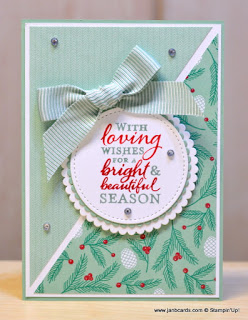 You
may remember that, during November, I was running a Prize Draw for my
online customers to win a Stampin’ Up! Scoreboard.

When I was at the
Christmas Shopping & Gift Event at the Pavilion Cafe on Thursday, I
asked Kellie – the lady who owns and runs the Pavilion – if she’d pick
the winner.

And I asked my hubby if he’d photograph the draw, too!

As you can
see from the photographs below, the lucky winner is Janice Hingley. 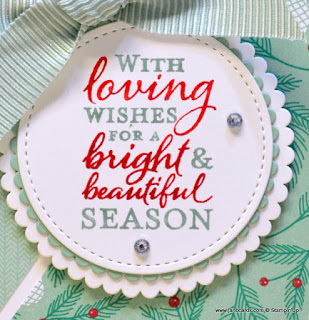 So big, big
CONGRATULATIONS to you, Janice!

I’ll send your prize to you with all the other
goodies you get for being one of JanB’s fabulous customers! THANK YOU☺

I would also like to say a big THANK YOU to Kellie for agreeing to pick the winner for me. Many thanks, Kellie! ☺

Photograph 8 – Kellie putting her hand in the bag to pick out  the winning ticket. 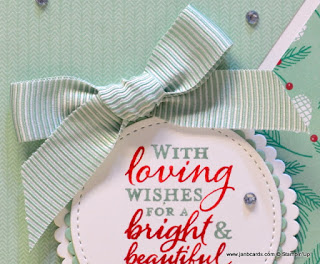 Photograph 10 – a close up of the winning ticket!

Today’s
card was inspired by a Thank You card I have sitting on one of the
stands in my studio, that I received from Paula Gorry recently.

When I
first started planning my card, I wondered if I put an extra layer on my
card, do I do the layer in proportion to the Whisper White layer? 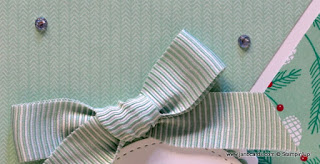 I
thought that would be the correct way to go and that the triangles would
workout correctly.

But then I thought, why not just take the easy
option?

The easy option was to do the Whisper White layer as normal and
just triangle the Designer Series Paper layer!

To
make today’s card, I started with a card base of Mint Macaroon
Cardstock (CS), with a layer of Whisper White CS and a top layer of two
triangles of Presents & Pinecones Designer Series Paper (DSP).

I cut
both designs an eighth of an inch smaller than I would have done, if I
was going to use the DSP as a “normal” layer!

I cut both triangles from
corner to corner, which gives me enough triangles for two cards!

I
adhered the Whisper White layer to the card base using Tombow, and then
two triangles.

I chose the sentiment from the Embellished Ornaments
Stamp Set, which was brought forward from last year. 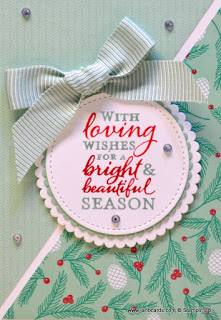 I used my Real Red
and Mint Macaroon Marker Pens to paint the stamp, starting with the red
first.

When I’d finished, I huffed on the image and stamped it onto a
piece of Whisper White CS.

I die cut the sentiment using one of the circle Stitched Shapes Framelits Dies, and layered it onto a Mint Macaroon scalloped circle which had been die cut with a straight cut circle from the Layering Circles Framelits dies.

It really made the image pop! 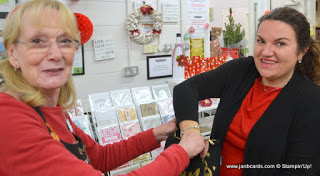 Before I adhered it together, instead of using the Whisper White layer, I tried using one of our doilies but they are too creamy coloured – which was a shame because it did look really good!

Once I’d adhered all the three layers together, I added the sentiment to the card front using Dimensionals. 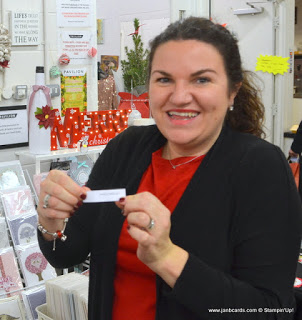 I tied a “bunny ears” bow using the gorgeous 5/8″ Mint Macaroon Mini Striped Ribbon and adhered it with Glue Dots at an angle just above the sentiment.

My finishing touches were, firstly painting the holly berries with my Clear Wink of Stella Glitter Pen.

Secondly, adding five Rhinestones randomly on the card front – three on the top DSP design and two on the actual sentiment.

Today’s card isn’t a traditional Christmas colour scheme but I do think it looks good! 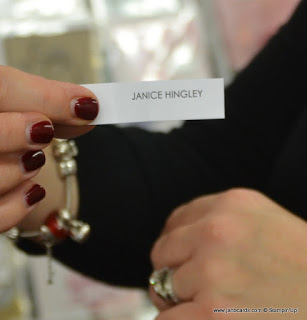 I hope you have a fabulous weekend, and until tomoorow, happy crafting.