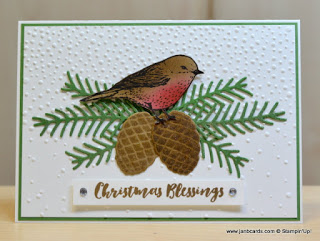 The robin I’ve featured on today’s card
is something I’ve been wanting to do for a long time, probably ever
since I first saw this stamp set, which is called Best Birds! I used my
Clear Wink of Stella Glitter Pen on the pine branches and the pine cones
although it doesn’t really show up except in the close up photographs! 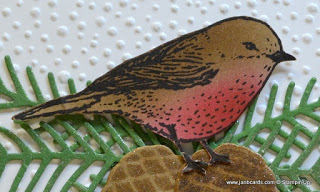 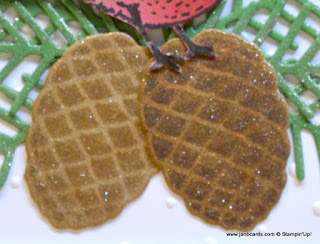 To
start today’s card, I took a Whisper White Cardstock (CS) base, then
added a layer of Garden Green CS and a top layer of Whisper White CS.
I dry embossed the first top layer I had, using the Softly Falling
Embossing Folder in portrait mode. As I worked my way through die
cutting the pine branches and cutting the bird out by hand, I realised I
need the top layer to be dry embossed in landscape mode.

I did another
layer and put the first layer in my DVD box called Layers 2 so it’ll be
ready for a future project. I adhered the two layers and the card base
together using Tombow. The pine branches are from the Pretty
Pines Thinlits Dies which co-ordinate with the Christmas Pines Stamp
Set. These two products are currently available as a bundle which means
you can save 10% off the price. 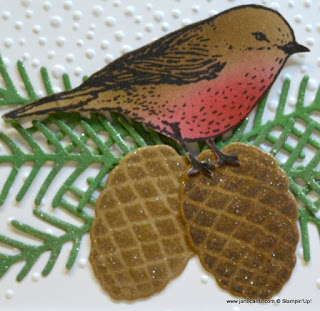 I
die cut two medium sized branches and four small branches, then painted
them all with my Wink of Stella Clear Glitter Pen. I used Soft Suede
Ink to stamp the first two steps of the large pine cone onto Crumb Cake
CS and then the third step in Crumb Cake Ink. When I die cut the pine cones, I knew I’d finish up
with a border of Crumb Cake CS.

I decided
to tone it down by sponging all over the image using my Soft Suede Dauber and I also sponged all around the image so
that there wouldn’t be any “virgin” Crumb Cake CS visible on the die cut pine cones.

I was really pleased with the result, the colour of the pine cones really blended in brilliantly! 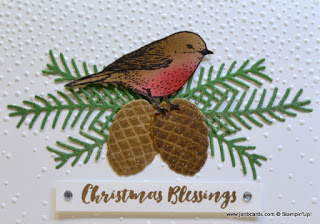 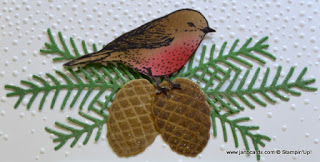 The
sentiment is also from the Christmas Pines Stamp Set. I stamped it on a
thin strip of Whisper White CS using Soft Suede Ink. I adhered it to
the card front using Dimensionals. The final touch was to add two
Rhinestones to the sentiment.

A very pleasing card! I hope
you like it, too. Until tomorrow, happy crafting.