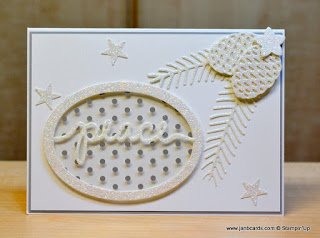 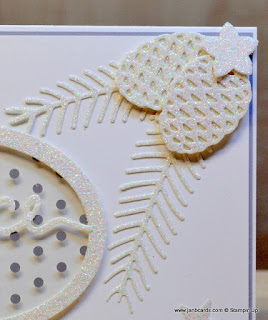 When I
was writing my blog last week, there were two or three occasions when I
referred to my die cut Ziplock storage bag for my Dazzling Diamonds
Glimmer Paper (DDGP).

I said that I had quite a lot of die cuts in
there, so yesterday, I thought I’d use some for today’s card!

The only
DDGP die cut on this card that I had to cut “fresh” is PEACE –
everything else was in the Ziplock bag!

When I had finished today’s card,
I spread the remaining die cuts out in an A4 plastic lid and photographed it –
see photograph 7!

If I really applied myself, I have enough die cuts to
make several more cards!

The
first pieces I picked out of the Ziplock bag are the two pines
branches, four pine cones and the oval frame. 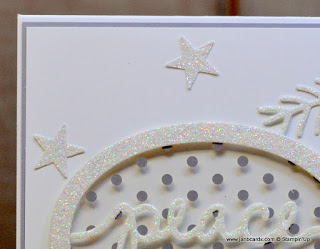 The spotted acetate I used in the frame, is a
product that I think has been somewhat over-looked.

The designs on the
acetate are in gold but look like silver on the reverse. 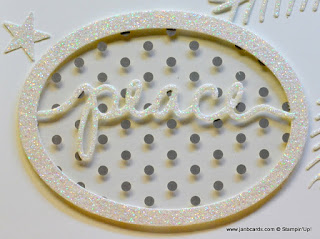 The acetate
arrives with a protective plastic sheet over it, which keeps it clean and
scratch-free.

When you’re ready to use it, you just remove it!

I
played around with various different arrangements until I settled on
the design you see.

I die cut the acetate using the largest oval die
from the Layering Ovals Framelits Dies but I don’t think that was the
right size. 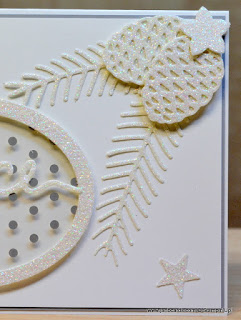 I applied Tombow to the back of the DDGP oval frame and
adhered it to th acetate.

I found the acetate oval was a bit larger
tham the DDGP oval!

I carefully cut off as much off the acetate oval as
necessary, so it couldn’t be seen sticking out from under the oval frame.

Then I used Tombow to adhere PEACE which fitted across the oval from
side to side very neatly!

I attached the image to the card front using Dimensionals. 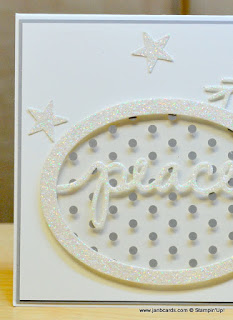 I
used Tombow to adhere the top “holey” pine cone to the solid one
underneath and then to adhere the pine branches to the top layer.

I used
Glue Dots to attach the pine cone that’s underneath the top pine cone,
which has been attached using Dimensionals and Glue Dots.

I’m not sure
where the flower I’ve used on the top of the pine cones came from.

I
suspect its the Wonderful Wreath Framelits Dies, but it finished off the
corner very nicely.

The
final touch was to add three stars – again, I’m not sure where they
came from!

This is the disadvantage of storing my die cuts in Ziplock
bags, but I can live with that. 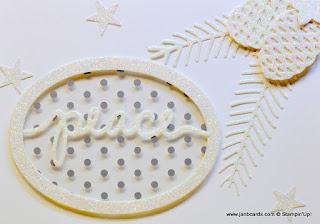 Just a note about all the die cuts you can see in the box!

I have no idea why I have three
hearts from the Bloomin Heart Thinlits dies, another two oval frames,
three stocking tops, three decorative strips from Flourish Thinlits
Dies, and a selection of stars, bows, and baubles! 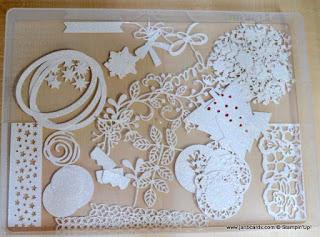 That’s abut it for today. Until tomorrow, happy crafting.