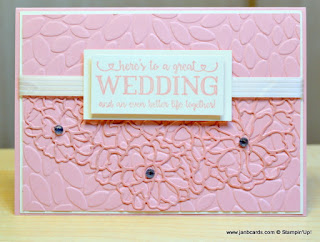 Hello, Crafters.
Yesterday I prepared and recorded Sunday’s video, which is a
Wedding Easel card, and as I was in the wedding mood, I decided to make a
wedding card to share with you today, as well!
To make the card I started with a card base of Blushing
Bride Cardstock (CS), with a layer of Very Vanilla CS, and a top layer of Blushing
Bride CS. I dry embossed the top layer using the fabulous Petal Burst Embossing
Folder. 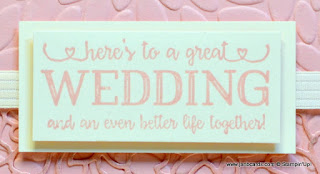 I used Tombow to adhere the top two layers together.  One of the products I used for the easel card
was the largest die in the So Detailed Thinlits Dies. As often happens, I wasn’t
sure if I wanted one of these die cut in Blushing Bride CS or Very Vanilla CS,
so I did one of each. Without a doubt, the Very Vanilla CS was ideal for the
easel card which meant the Blushing Bride CS die cut was spare!

I painted the die cut with my Clear Wink of Stella Glitter Pen
and adhered it on to the embossed layer, positioned so the narrow side was against the outside
edge. At this point I wasn’t sure if I was going to use the card landscape or portrait!
I adhered a strip of Very Vanilla Satin Stitched Ribbon
across the top of the die cut and anchored it on the reverse of the layer. Then
I used Tombow to adhere the layer to the card base. 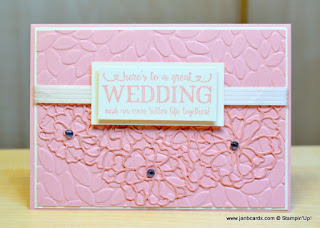 I used the same sentiment that I used on the easel card,
which is from the Better Together Stamp Set. Using Blushing Bride Ink, I
stamped the sentiment onto a piece of Very Vanilla CS. I wanted to layer the
sentiment but I knew that if I used Blushing Bride CS it wouldn’t be very
visible. I decided to layer it onto another piece of Very Vanilla CS, but to
put the top layer on Dimensionals, so that it created a shadow to create a “layer”!
Then it was time to decide which direction I was going to
have my card. I played around with where I thought the sentiment looked best, until I decided on the way you see it now.
The final touch for the card front was to add three rhinestones to the centres of
the flowers in the So Detailed Die cut. The decoration inside the card is also from the Better together Stamp Set, stamped three times – once in the centre then once each side. 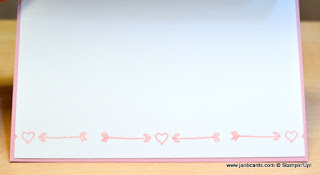 I hope you have a great weekend. Until tomorrow, happy
crafting.