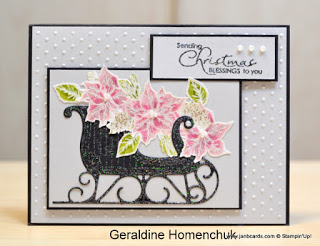 I had such an amazingly busy day yesterday, I didn’t make it into my studio!

This
year I was thrilled to receive so many hand made Christmas cards. I love them all and want to share the Stampin’ Up! ones with you. As usual, I’ve put the
creators name on each card and I’ll do my best to tell you which
products they’ve used. 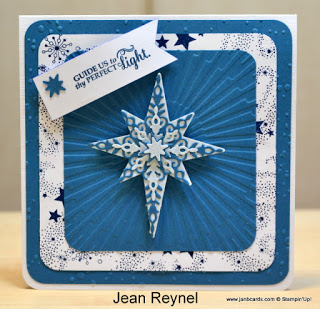 Not all the cards are 100% Stampin’ Up! but they
are mostly!

If you like, I’ll post photographs of the non-SU cards on the Photo Gallery page but I won’t be able to help out with products that have been used. Let me know if you’d like me to share them with you. 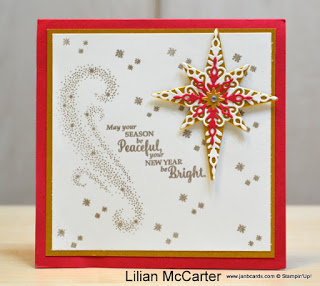 Photograph 1 – Geraldine Homenchuk is a fellow demo who lives in Canada. Unfortunately, because of my poor photographic skills, you can’t see the real beauty of this card! This is the best card I’ve seen that uses the Santa’s Sleigh Stamp Set and Dies, and also the poinsetta from the Reason for the Season Stamp Set. The sleigh has been heat embossed in something gold and sparkly, and then die cut. The poinsettas have been heat- embossed in white and coloured. The poinsettas have been fussy cut and the sentiment has also been heat embosed with the same product as the sleigh. Geraldine  paid an equal amount of attention to the inside of the card and also the envelope! Thank you, Geraldine! 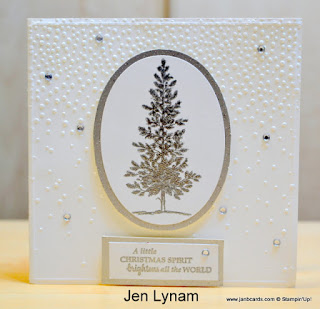 Photograph 2 – Jean Reynel is a customer who lives in France. Jean chose to use the stunning Star of Light Stamp Set and the co-ordinating Starlight Thinlits Dies. Although it’s not a Stampin Up! product, I love the embossing folder Jean has used behind her star. The blue cardstock is Dapper Denim, Jean has also decorated the inside of her card beautifully. Thank you, Jean!

Photograph 3 – Lilian McCarter, who lives in Scotland, is a member of my Stampin’ Up team, which is called JanB’s Super Stars! Lilian chose the same products as Jean but used Real Red and Very Vanilla. The gold cardstock is non-SU. All Lilian’s stamping, both on the inside and the outside of her card has been heat-embossed with Gold Embossing Powder. The inside of the card has also been layered with Whisper White and Real Red Cardstock. Thank you, Lilian. 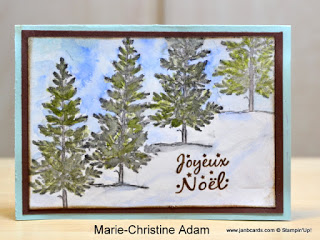 Photograph 4 – Jen Lynam is another of my Super Stars! Jen’s card is a great example that shows you don’t have to use Christmas stamps for Christmas cards. It also shows what a brilliant stamp set Lovely As A Tree is and why it’s the oldest stamp set in the catalogue! Photographing silver embossing is particularly challenging but I think I’ve been successful with Jen’s card! The tree, the sentiment and the greeting inside the card have all been heat-embossed with Silver Embossing Powder. The silver paper in non-SU. At first I thought Jen’s card was two layers but it isn’t. She has embossed lines down all four sides which gives this impression! Many thanks, Jen! 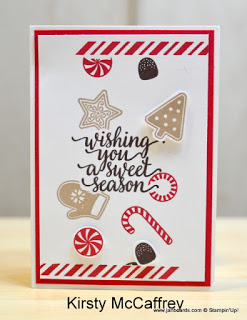 Photograph 5 – Marie-Christine Adam is a French customer and is brilliant with her water-colouring techniques. It’s one of the goals I’ve set myself for this year – get to grips with water-colouring! What I like about this technique is the randomness of it as opposed to the orderliness of my style! Do you know what I mean when I say that? Marie-Christine has also used Lovely As A Tree for her Christmas card, yet it looks so different to Jen’s card. Many thanks, Marie-Christine! 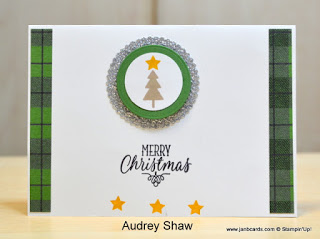 Photograph 6 – Kirsty McCaffrey is another of my Super Stars. Kirsty’s style on this card is another one I like because of it’s randomness – another technique I haven’t tried! Kirsty chose to use the Candy Cane Christmas Stamp Set. I imagine Kirsty stamped the sentiment and the two stripes first to use as a framework. Then I think she made masks for all three and placed the smaller images – some stamped, some cut out by hand – so they look balanced. I’ll check these thoughts with Kirsty – I’m probably miles out! Many thanks, Kirsty! 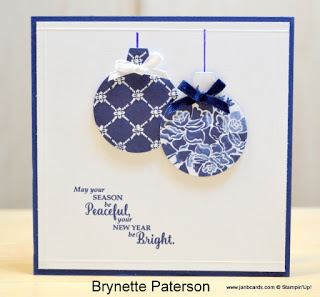 Photograph 7 – Audrey Shaw is another of my Super Stars, who lives in Scotland. The sentiment and the tree Audrey has used are from the Hang Your Stocking Stamp Set and the star may be from the Tin of Tags Stamp Set. I love the idea of using strips of DSP down either side of the card – personally I think it looks so much nicer than using Washi Tape. As you probably know I’m not a big fan of Washi Tape, although I do use it on the odd  occasion. Audrey also decorated the inside of her card using the tree and the star. Many thanks, Audrey!

Photograph 8 – Brynette Paterson is my cousin who lives on the south coast. Brynette has used Night of Navy and Whisper White Cardstock and a very non-Christmas DSP that looks absolutely brilliant. It’s called the Floral Boutique Designer Series Paper. All the designs in that pack are just these two colours and are stunning. I don’t recognise the bauble dies so they could be retired or non-SU but they look great whatever they are. Brynette has also scored lines on four sides of her Whisper White layer. Many thanks, Brynette!

I think you’ll agree that these are all beautiful cards. I fully understand why people are more likely to keep hand made cards than shop bought ones! Until tomorrow, happy crafting!