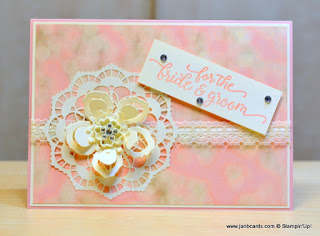 This
morning I uploaded my Falling for You Wedding Card Video.

I shared the
Sahara Sand version of this card card with you on Friday, yesterday I made one in Blushing
Bride and on the video, I made one in Soft Sky.

When
I was working on a totally separate project on Friday for my daughter’s
engagement, I decided to use the same ribbon idea that I’d used on
the wedding card, but with a difference!

When
I made the Blushing Bride card, I played with the idea of making the
flowers in Blushing Bride Cardstock as well, instead of Very Vanilla. I found that, although it’s a relatively light colour, it was far too dark to
go onto Very Vanilla, so I stuck to the original idea!

The particular design I used from the Falling For You Designer Series Paper (DSP), for the Soft Sky card,
was my least favourite design. I’ve changed my mind now that I’ve used it! I think it looks absolutely fabulous
on this card – the more I look at it, the more I like it! 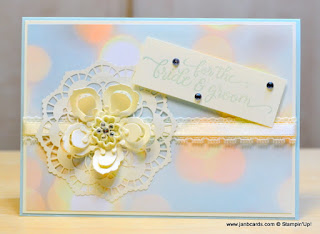 Apparently,
this design was based on the Bokeh technique, which I have to say is a
technique I haven’t tried! One day!

As promised, today I have also included a photograph of the inside of yesterday’s dragonfly card!

The
card I had planned for today’s video was a peek a boo card I’d been
requested to do.   Unfortunately, it didn’t work out as well as I thought
it should have done. 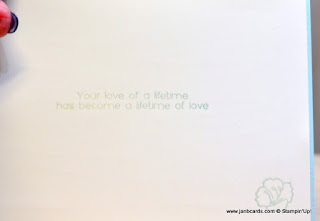 I knew what I needed to do to correct the problem
but I didn’t have the time to do it – and make the video, upload and
edit it! – so I had to make a quick decision on what card to make.

I
chose Friday’s wedding card because it was well received on my blog first,
and then later on my Facebook page. 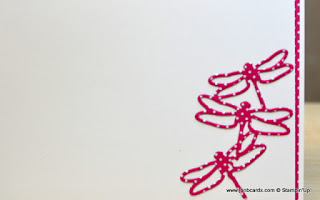 I’ll carry on working on it
tomorrow, and hopefully get it right in time for Wednesday’s video.

That’s about it for today. Happy Sunday and until tomorrow, happy crafting, too!