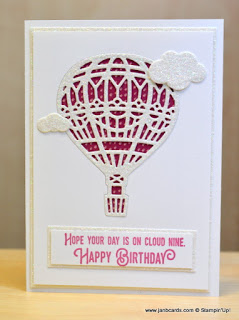 Oh, dear! I prepared yesterday’s blog but forgot to PUBLISH!

I’m really sorry for not hitting the PUBLISH button for yesterday’s blog! Somethings are meant to be!  My blog was all about today’s video which has now gone live. I have my second class for the weekend today so will keep this short!

Tomorrow I’ll share the two cards from this weekend’s classes but the 3D project will be the subject of Wednesday’s video. 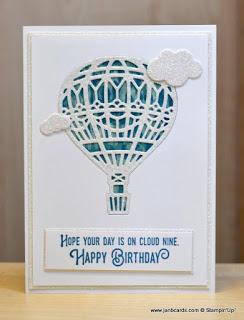 This
weekend I have my first classes for 2017 and I’ve chosen to feature the
Lift Me Up Stamp Set and the Up & Away Thinlets Dies.

No doubt that doesn’t come as a surprise given how much time I’ve spent playing with this set!

It’s been a really busy week for me and I didn’t
have a clue what I wanted to do for Sunday’s video.

I concentrated my
efforts into making sure I had everything ready for my lessons.

As I was
preparing the 3D project for the classes – I’ll feature this on
Wednesday’s video – I had a great idea for Sunday’s video! 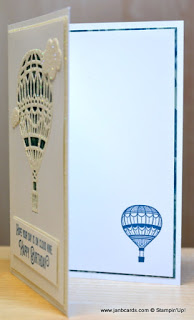 When I do the video for Wednesday, there won’t be a Balloon in sight, except to show the one we did in the weekend’s calsses! LOL!

For my video card, I took an
idea from one of the cards and an idea from the 3D project, put them
together and tada!

I
stopped what I was doing, cleared the deck, and made the card I had in
my mind.

I was so pleased with the result, I also made a video straight away!

The
class card has a hot air balloon die cut from the top layer of the card
and then adhered back into position. 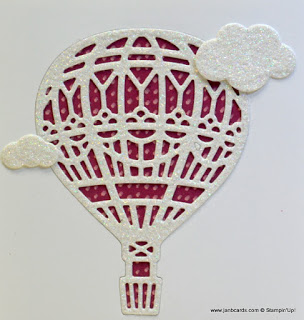 For the video, I die cut a balloon
using some Dazzling, Diamonds Glimmer Paper and put that back into the
opening in the card front instead of replacing the origiginal hot air
balloon.

I
adhered a piece of Blooms & Bliss Designer Series Paper (DSP)
between the Glimmer Paper and the top layer to cover the opening for the
hot air balloon.

I die cut the Glimmer Balloon and adhered it in place.
I also die cut one small and one large cloud from the scrap left over
after cutting out the balloon, and adhered them in place, too. 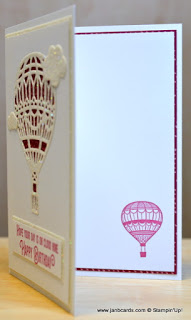 Using
Island Indigo Ink, I stamped the sentiment on a strip of Whisper White
CS and layered it onto a piece of Glimmer Paper using Glue Dots.

To
decorate the inside of the card, I stamped the small balloon with Island
Indigo Ink onto the Whisper White CS layer, and adhered this to a layer
of the same DSP I used behind the large balloon on the front of the
card.

For the card in the video I used Sweet Sugarplum as my colour, with DSP from the Blooms & Bliss pack.

I hope you all have a great weekend. Until tomorrow, happy crafting,