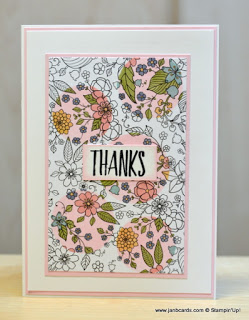 Yesterday
I wanted to have a play with the Sale-a-bration (SAB) Between the Lines
Designer Series Paper (DSP). At first, I thought I’d do something
similar to one of the make’n’takes we did at OnStage in Telford, which
was partial colouring.

As I was getting  myself organised, I suddenly
thought this would be brilliant for Spotlighting. I know two ways this
technique can be done and wasn’t sure which way I wanted to go. Long
story short – I did both! 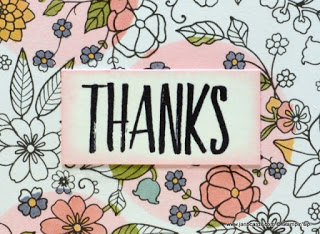 I
cut a piece of the DSP to the normal size I use for a top layer because I wasn’t quite sure which direction I’d be going in. I took a
sheet of 3″ x 5″ Post It Note and used my 1 1/4″ Circle Punch to punch
three random circles. 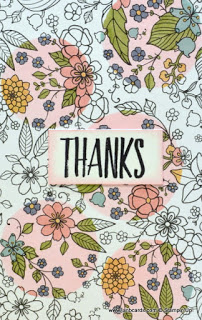 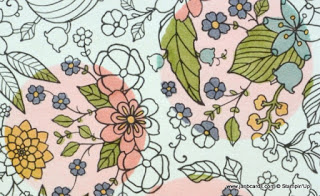 I
placed it more or less in the centre of the piece of DSP I’d cut and
I started painting with my Marker Pens. The colours I chose were Wisteria
Wonder, Pear Pizzazz, So Saffron, Blushing Bride and Pool Party.

First, I
used So Saffron to do the insides of the flowers and then changed to
Pear Pizzazz and did all the leaves. I used the three remaining pens to
colour the flowers.

While I was painting, I frequently had to lift up a part
of the Post It Note to check exactly what the lines were that I could
see!

Once
they were all coloured, I masked off the area surrounding the Post It
Note that had the circles in, so that there was no DSP visible. I took
my Pink Piroutte Ink Pad and inked one of my new Sponge Brayers. I rolled it over the three circles, several
times, and built up a good amount of colour. I carefully lifted one
corner of the Post It Note to see how dark the Pink Pirouette was. I
thought it looked great, so I removed all the Post It Notes and was
really pleased with the overall result.

However, I was disappointed that I’d only
used three smallish circles, so I repeated the process but this time I
punched five circles of different sizes, which were: two 1 1/4″ circles,
two 1 3/8″ circles and one 1 1/2″ circle. The finished result was so
much better. 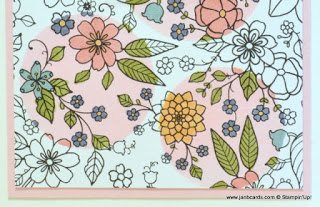 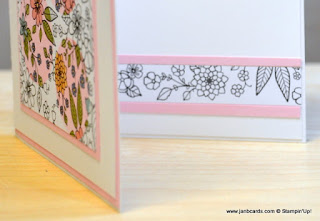 I stamped THANKS using Basic Black Archival Ink
on to a small piece of Whisper White CS and sponged the edges using Pink
Pirouette Ink. The stamp is from the All Things Thanks Stamp Set. I
used the one which says THANKS FOR THAT THING YOU DID but I cut the
Thanks off!

Please note, if you do this to any of your stamp sets,
you”ll make your guarantee with Stampin’ Up! null and void! The reason I
don’t worry about this is that I don’t expect to have any problems with
my SU stamps!

My final touch was to decorate the inside of the card which is a one of the offcut strips of the DSP and I have butted of a this strip of Pink Pirouette CS, top and bottom.

Tomorrow, I’ll show you what I did with the card that has three Spotlight circles and also give you the products and measuremnts you need to make this card!