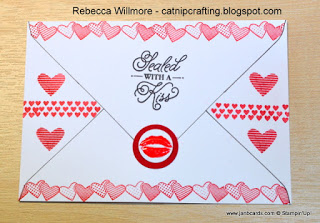 I’m
so very pleased to say that yesterday I managed to get all the necessary
info and documents together for my accountant to come over and do my tax return
for me!

Talk about cutting it fine – she’s coming over on Monday and my
return has to be in by Tuesday! 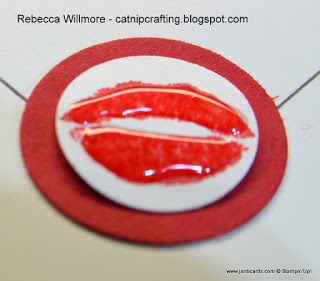 Every year I tell myself I’ll do it
earlier next year but I never do!

When I wrote yesterday’s blog I said I was given five swaps at training on Sunday, it was actually
six! As always, I’ve put everyone’s names on the photograph together with the
website or email address of the creator, if I was given it.

Photographs 1 and 2:
the first card is by Rebecca Willmore. 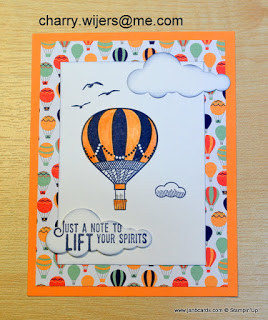 She’s drawn the outline of the
back of an envelope and worked all her stamping around it – such a
brilliant, original idea, I love it!

Another highlight of Rebecca’s card
are the red glossy lips, which have been stamped in Real Red
Ink and then she’s put a thick layer of the Fine Tip Glue Pen on
the lips and left it to dry – another brilliant idea!

Photographs 3 and 4: this card was made by Charry Wijers. She has used a technique I’ve never tried before – yet! – and I don’t know what it’s called.

Charry has used her embossing tool and embossed the balloon from the back of the card which has resulted in the balloon being raised – I think you can just about see the effect in photograph 4. It’s amazingly tactile and definitely something I will have to try some day soon – a brilliant idea! 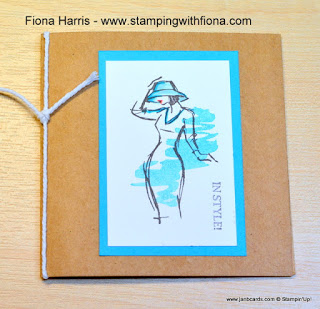 Photograph 5: this card was made by Fiona Harris. I never tire of seeing projects using the Beautiful You Stamp Set – it’s such a surprisingly versatile set.

Fiona has paid attention to the little details which is what I always say makes so much difference to a card! She has used one of, what I call, the splosh stamps to colour the image.

Fiona has also highlighted the “V” neckline, the right shoulder, and has used two shades of blue for the hat. Then she added a tiny splash of red for the lips, which really makes the whole image pop! I also love how she has stamped the sentiment sideways – another nice touch!

Photograph 6: this bookmarker was made by Maria Eugenia Gamlin.

Maria has avoided a common mistake that I’ve seen made by lots of crafters, and that is, she has kept the bookmarker flat, no 3D embellishments that can damage the inside of the book!

The row of hearts has been designed to be raised on both sides, but Maria has kept them flat. 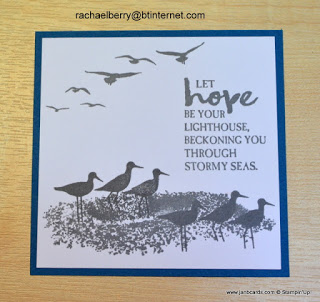 I think Maria has made a brilliant job of her bookmarker and I wonder if she’s a reader of proper books, like me!

Photograph 7: this card was made by Rachael Berry. I have this stamp set but haven’t used it except for the seagulls with my hot air balloon card!

Using Basic Grey rather than Basic Black makes a huge difference to a card, especially when the sentiment is one of hope. 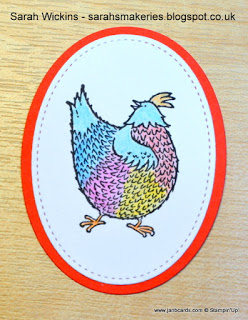 Photograph 8: this card was made by Sarah Wickins. Sarah and I are very much alike with our approach to cards – we both think less is more.

You may remember a blue and white swap I received from Sarah when we went to Telford in November. Sarah was pleasantly surprised that it inspired me to create a card based on her swap.

The chicken is from the Hey, Chick Stamp Set that’s available as one of the gifts available in the Sale-a-bration catalogue and is very much a Marmite set – you either love it or hate it! Having said that, very interestingly, it’s sold out and is currently on back order!

I must just tell you about an email I received from my daughter earlier this morning! To keep a long story short, I stopped working for her – she runs her own bookkeeping business – last September.

As she’s currently winding her business down, she emailed an official letter of Termination of Employment (I was on the payroll). The sentence that made me really laugh was “The most weird way to sign off an email to you really, but just to say that I love you very very much….and here’s your P45! (Official tax form we get in the UK when we leave a job!)

I really did LOL! On that very happy note, that’s it for today. Until tomorrow, happy crafting.