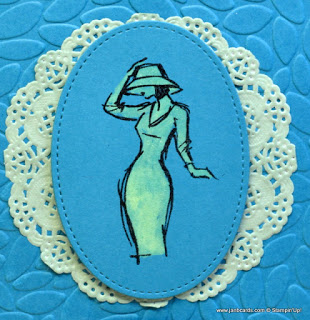 Earlier
this morning, I uploaded my Bleaching Beuautiful You video.

Bleaching is
another of those techniques I really enjoy, partly because the result
can’t really be predicted.

In the video I show the test I carry out
before starting to create a card, even though this is no guarantee of the final result.

This was demonstrated brilliantly with the Perfect Plum
card I shared with you on Wednesday. 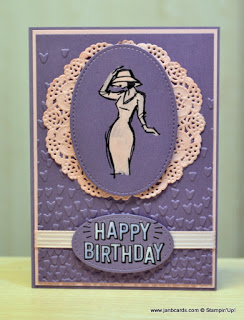 The image of the lady was very
definitely close to Blushing Bride, although the sentiment, which was
also on Perfect Plum resulted in a very bluey colour with just small
areas that hinted at Blushing Bride.

As I explained on Wednesday, I can
only imagine this happened because the two pieces of cardstock must have
come from different batches – I can’t think of any other explanation.

I’m
surprised I allowed myself to be caught out with two doilies stuck to
each other because I normally choose to use two at a time, as it makes
the white whiter! 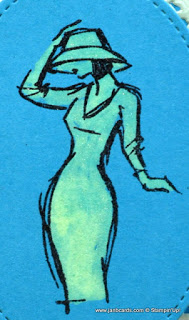 For this project, I only needed a single doily because I was changing the colour of it anyway, but I found that I had two on the Blushing Bride card!

At least I didn’t make the same mistake on
the video card, and it’ll be relatively easy to go back and adhere the
double doilies together!

In
all the 254 videos I’ve now uploaded onto YouTube, this is the second
video where I had a lightbulb moment while I was actually filming.

(I
wish I could remember what the first one was).

On this video, I said to
put some SNAIL on the two ends of the ribbon, and adhere the ends round
the back of the card.

As usual it was a bit of a fiddle and didn’t work
properly and then the light went on!!

I did a rewind and suggested that
the SNAIL is put onto part of the ribbon that would be sitting on the
front of the card. 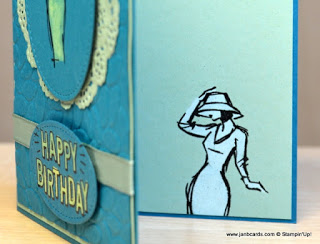 It was so much easier and, with the aid of my Grid Paper, success was guaranteed!

On the video,I also showed the other two cards I made last Tuesday when I was experimenting with the Beautiful You Stamp Set, with mauve/purple colours and of course, bleach!

I will explain both card in detail during the coming week.

Yesterday
I was working on a lidded box that was big enough to hold ten cards and
envelopes, which had been requested by one of my YouTube subscribers. 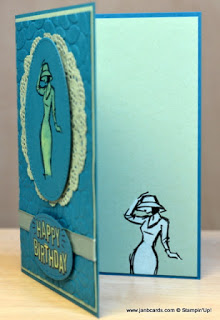 I
was so pleased with the result, that I’ll be making a video.

I was
thinking that, as those of you in the US have different size cards to the everywhere else (I believe?),  I could give two sets of measurements and one set of
instructions so the video would be beneficial to all cardmakers, wherever
they live.

So that’s the plan!

I think that about it until tomorrow. I wish you a happy Sunday and happy crafting.