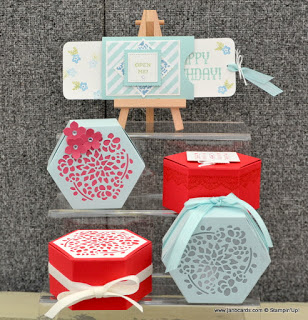 Today,
I’m sharing some of the cards and 3D projects we had on display at the
Make It Show, on Friday and Saturday.

I’m not sure who made what but I think they were all made by Karen Ripley, Pip Todman and Fiona Whitton.

Photograph 1 – the card at the top is a double slider card i.e. as you pull the ribbon, it pulls out the Happy Birthday on the right hand side, and at the same time the flowery card slides out on the left hand side. 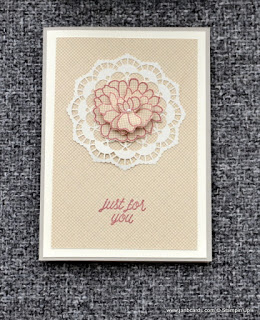 The four boxes have been made with the Window Box Thinlits dies – another set I have, but haven’t used yet!

I’ve seen projects where crafters have made the box taller than it was intended to be. I think I know how it’s done – i.e. by not putting the cutting mat over the cutting edge – but I’d like to check it out before I waste some cardstock unnecessarily.

Photograph 2 – this card is so simple but so striking, right up my street!

The Designer Series Paper is from Falling In Love and the flower from the So In Love Stamp Set has been stamped onto the same design several times and fussy cut. 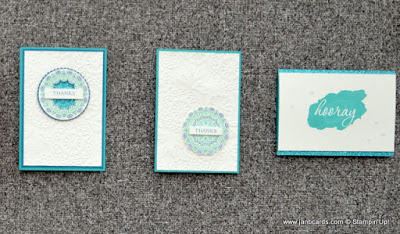 The flower was beautifully made but I’m not quite sure how – I need to do it myself to try and replicate it! 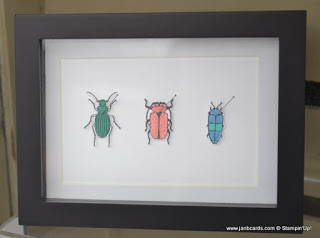 Photograph 3 – these three cards have been made using the two new stamp sets in the second release of Sale-a-bration gifts. 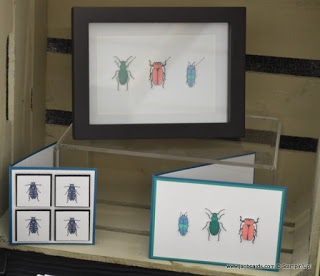 I haven’t received my stamp sets yet – hopefully on Tuesday! – but I will also try to replicate these as the photographs are too small for you to appreciate their real beauty.

Photograph 4 – I do not like bugs, for real or as images!! But I do have to say I have seen some great projects made with the images in the Beetles & Bugs Stamp Set, not least these three projects here!

The framed picture has actual pins stuck into the bugs’ images!

Photograph 5 – the card on the right hand side is more or less the same as the picture in the frame.

The card on the left hand side looks very striking, but again it’s too small to really see the detail. Unfortunately, I can’t replicate this one as I don’t have the bug set! Maybe I can go back and enlarge the photograph! No promises but I’ll see what I can do!