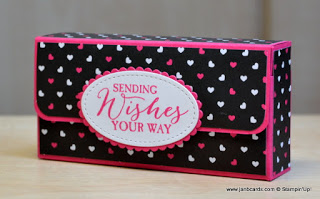 Earlier
this morning I uploaded my video which shows how to make this super
quick and easy Handbag Tissues’ Box.

I received one similar to this from
one of my friends and I was so thrilled with it, I just had to make
one.

When I found how quick and easy they are, I had to share them.

The
box I feature in my video was designed by a lady called Maria Fennelly. Her blog can be found at www.mariafennelly.blogspot.com and she calls
herself Maria’s Creative Place.

No
doubt I’ll make these as online customer gifts one day, although it
won’t be in the forseeable future, as I already have several ideas in
the pipeline! 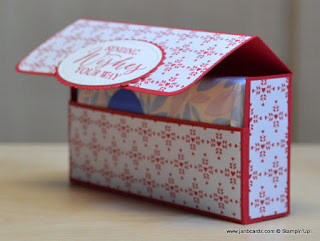 The first box I made used the A Little Foxy Designer
Series Paper (DSP) Stack and I chose to use Calypso Coral Cardstock (CS) for the actual box.

When I first watched Maria’s video, she didn’t say which end of the
cardstock to cut the corners out, which could only mean that it didn’t
matter. But the two end sections of the scored cardstock were different
measurements so it had to make a difference somewhere! 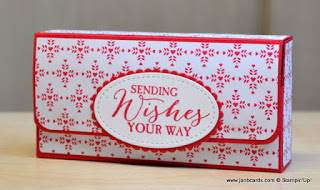 Of course, the
only way to find out was to make two, which is exactly what I did. The
second box I made used the Pop of Pink Specialty DSP and I chose Melon
Mambo CS to go with one of the black designs. 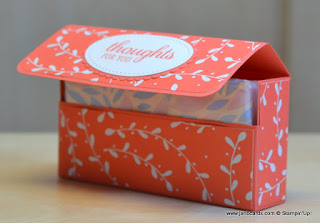 The
only difference was between the length of the front flap and the inside
height. It really didn’t make much of a difference one way or the other
and I didn’t finish up with one that I preferred over the other.

I covered
all six sides in my box but it wasn’t really necessary – I just preferred
it that way. This project is great for helping to use up scraps. 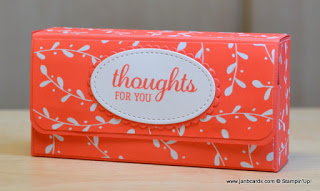 I’m off to a meeting this morning and then I’ll be back to finish off getting January’s happy mail ready to be sent out tomorrow!