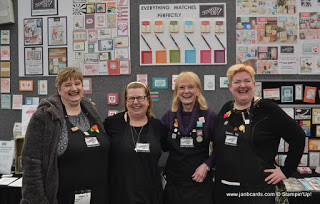 We
had an absolutely fabulous day at the Make It Show yesterday! It was far
busier than the Friday last year, with our sales higher than normal and
more interest in joing Stampin’ Up! 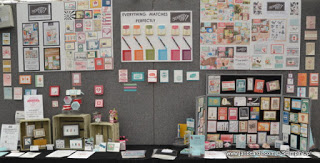 I had four people I gave infomation
packs ank joining and will be phoning them during the week to see if
they want to take it further. It still amazes me the amount of people who say they’ve never heard of Stampin’ Up! 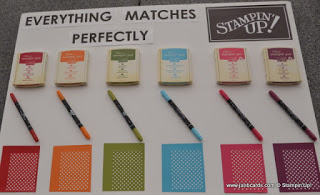 My
demonstration featured the Beautiful You Stamp Set and the Make-n-take
featured it as well. Crafters loved having the opportunity to make this
card – simple but striking! I was amazed at how many visitors said they
just received/ordered/bought this stamp set. I don’t think I’ve ever
known a stamp set to be so popular! 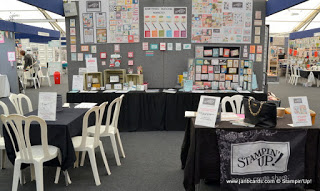 Karen
did a demo using embossing folders, both dry and painting the inside
with ink. The one that amazed me most was the Cable Knit Embossing
Folder with ink. Pip’s demo was inks, paper and watercolouring, which I
thoroughly enjoyed watching – I really want to learn this technique. Fiona demo’d the succulents, which is a set I have but haven’t actually
made any of them. Although I did use three of the flowers, which I’d
rounded the points of for the decorated wedding favour box.

Photograph 1 – from left to right: Karen Ripley, Fiona Ripley, me and Pip Todman
Photograph 2: the back of the stand
Photograph 3: a close up of the poster on the back wall Everything Matches Perfectly.
Photogrph 4: same as no. 2 but further back so the make-n-take table is on the left and the demo table is on the right
Photograph 5: closer view of one of the displays.

I hopeyou have a great weekend. Until tomorrow, happy crafting.