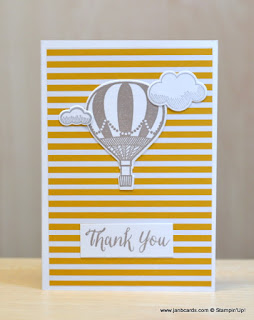 I was
really disappointed on Sunday when I realised my February Thank You
cards were almost identical to my October 2016 Thank You cards.

I was so
disappointed that I went back to the drawing board, and used my most
used stamp set – Lift Me Up – to create something
new………….but still using the 2015 – 2017 InColour Envelope
Paper!

I
was inspired to use the balloon set because I still had on my desk, two tubs of
pre-stamped, pre-cut clouds that were left over from my classes the
weekend before last! 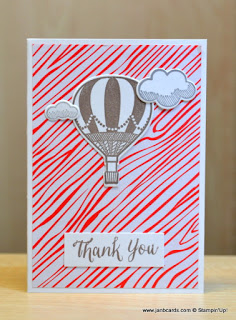 I don’t normally do any stamping in advance for my
classes but on this occasion, the projects we were making involved a
fair amount of stamping and die-cutting, that I did lots of the medium
and small clouds in advance.

My attendees were given the option of using
up to three large and three small clouds, but everyone decided to stick
with my design which was one medium and two small.

I
used our Notepads and Envelopes for my cards and added a layer of the
Envelope Paper. 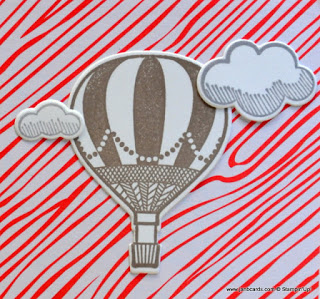 I
chose Tip Top Taupe for the balloon and sentiment, and Smokey Slate for
the clouds.

I tested the sentiment, which is from the Rose Wonder Stamp
Set, on a scrap of envelope paper to see what it looked like, but decided it wasn’t as visible as I
wanted, so I tried again with the darker Soft Suede Ink.

I still wasn’t
totally happy with it and decided to stamp the sentiment on strips of
white cardstock, instead.

Still using Tip Top Taupe Ink, I stamped the larger
balloon and die cut it using the Up & Away Framelits Dies. 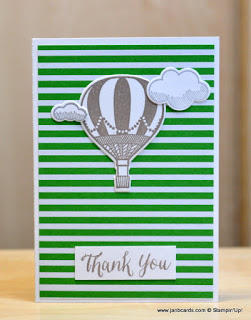 Eventually I ran out of ready made clouds and had to make a few more!

The next decision was, do I add the balloon to a square, oval or circle,
and then onto the card base, or adhere it straight to the Envelope
Paper.

I tested to see what each option looked like and it was no
contest!

I used Tombow to adhere the Envelope Paper, the images and the
sentiment to the card base. 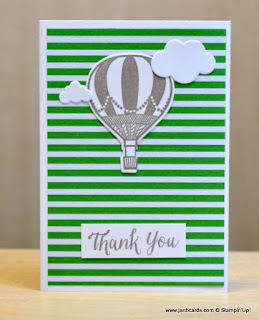 There
was a third tub on my desk which contained some die cut clouds that
hadn’t been stamped, so I thought I’d use them on two cards so you could
see the difference!

To stamp or not to stamp, that is the question?? See the last two photographs.

I feel so much happier about my February Thank You cards now, and my parcel full of hostess gifts has just been delivered! Yay!

My first job once I’ve published today’s blog is to make tomorrow’s video, which will be the wedding favour box I shared here a few days ago.

Then I can get my happy mail sorted out while I waiting for my video to upload, or download.

Is there a difference between these? 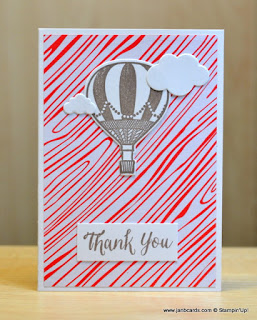