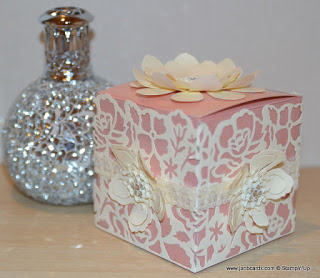 Did
you notice that the super white gift boxes with acetate sleeve have
been brought forward into the new Spring catalogue – see page 23?

Yesterday
I decided to have a go at decorating one and not surprisingly, the
finished result would make a fantastic wedding favour box!

But the
answer is no, I won’t suggest these to my daughter when she gets married
later this year! 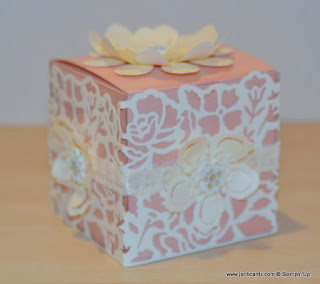 Although, it would really depend on how many she
wants, because there’s a lot of work involved in creating this! 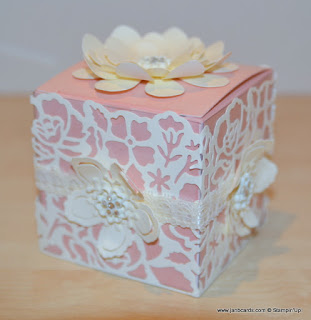 I
started decorating this box by colouring it with Blushing Bride Ink.

The boxes arrive flat-pack, and whichever side you lay them down, you
can see some of the inside of the box.

To avoid getting ink inside the box, I took some scrap paper the same
width as the box but longer and put it through the middle so only the
outside of the box could be seen.

I used the new Sponge Brayers to apply
the ink, one side first, then turning it over to do the reverse side.

I
made sure I kept the scrap paper in place and then inked the second
side.

The colour went on very easily and very quickly.

I left it to dry but became impatient after a while and dried the ink
off using some kitchen towel. 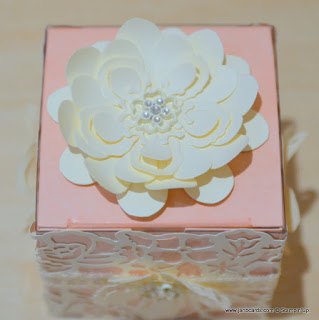 Although quite a bit of ink came off onto
the towel, it didn’t seem to affect the depth of colour!

I
took a  piece of Very Vanilla Cardstock (CS) that measured 12″ x 3″, and die cut along the
length of it using the largest Detailed Floral Thinlits Die and cut
three times along the length.

I worked out where the centre was on this
strip and placed it on the acetate sleeve that I had put into shape.

I
gently folded the strip round on both sides, and slid my fingers to the
back to gently fold the diecut around these corners, too. 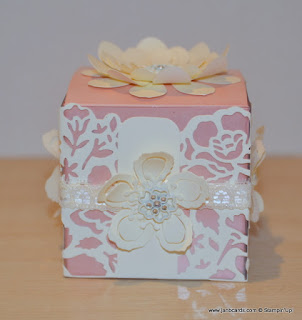 The strip was
too short so I cut a strip of Very Vanilla CS that was an inch wide,
and rounded the corners with the Project Life Corner Rounder.

I
put the strip onto my score board and lined up the first fold with a
channel on my board and very, very carefully scored on the fold line, then I did the other three folds.

I
do this because scoring gives a far more professional looking fold.

I put
Tombow, as thinly as possible on the back of the strip. 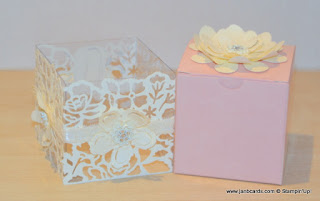 Before
attempting to adhere this to the acetate sleeve, I dabbed the sheet onto
a piece of scrap paper.

It’s important not to allow TomBow to go
anywhere apart from immeditely beneath the strip, otherwise the acetate looks a mess! 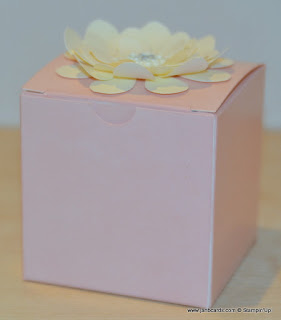 The next step took very steady hands, and when I was happy the
bottom of the strip lined up with the bottom of the acetate, and that the
two sides were in the correct position, I adhered the strip down.

I
really didn’t want to get on glue anywhere that it would be visible!

Once the front was down it was easy to follow the sides and back down,
as well. 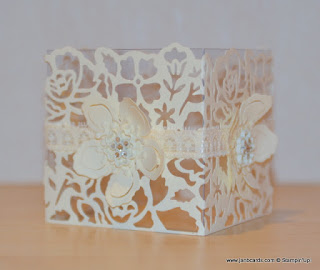 I
adhered some of our Very Vanilla 1/2″ Lace Trim onto our 3/8″ Very
Vanilla Stitched Satin Ribbon by applying a little bit of SNAIL evry 3 –
4″ along the Stitched Satin.

I used some Fast Fuse every 3 – 4″ on the
back of the Stitced Satin, and adhered it around the acetate sleeve,
making sure it the end was at the back.

I
die cut all the flowers I needed from Very Vanilla CS using the
Botanical Builder Framelits and the Succulents Framelits dies. 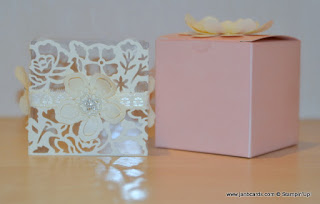 The latter flowers’ petals were far too pointed for my flowers, so I pushed the tips of the petals into varying
sizes of circle punches (from the hole under the punch).

My final touch was to adhere one of the Falling
in Love Embellishments into each  centre of the flowers.