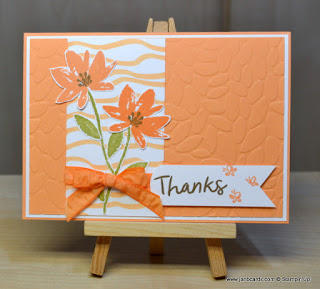 Just
over 24 hours left and we say goodbye to Sale-a-bration (SAB) for another
year!

It’s been a great time and the gifts this year have one
of the best selections we’ve ever had!

While I’m disappointed to see SAB go, I’m a perenniel optimist
so I always think that when one door closes, another one opens and Stampin’ Up! is never short on surprises! 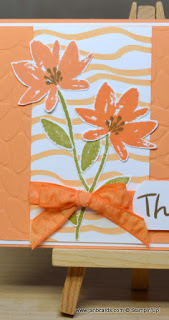 I
surprised myself yesterday working on my swaps – I’ve made a total of
67 so far!

Two or three more days and I should be there, including the
extras I’m making for my customers!

I’m planning a video to show how I
made my swaps, and if I have time, I’m going to make a stepped-up
version to share with you.

I’ve already made part of it, I just
need to finish it off!

The swap video should be uploaded on Sunday 9th April. 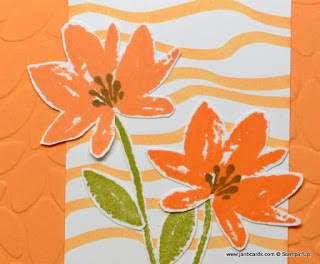 Back then the card
was my take on a make-n-take we made when we went to the Stampin’ Up!
2015 Sale-a-bration Roadshow in Basingstoke in December 2014.

The
SAB stamp set I used back then was called Lotus Blossom, and today’s SAB
stamp set is Avant Garden.

Like the 2015 stamp set, today’s flowers had
to be fussy cut but they were quite straightforward! 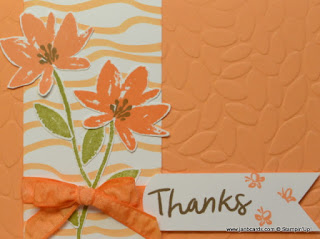 I adhered all three
layers together using Tombow.

I took a 2¼” strip of Whisper White CS
and, using the brush end of my Peekaboo Peach Marker Pen, “drew” some
squiggle lines from side to side! 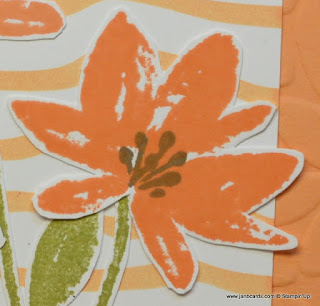 Then I stamped two flowers using Peekaboo
Peach Ink, and then again on top of each other!

This is relatively easy to do because they’re photopolymer stamps.

The
double stamping can be omitted; I did it because I wanted my flower
heads to be darker than the rest of the Peekaboo Peach colours.

The
stamp set in 2015 was two step stamping so it was easy to achieve the
darker colour.

Finally, I stamped the stamens inside the flower heads
using Soft Suede Ink. 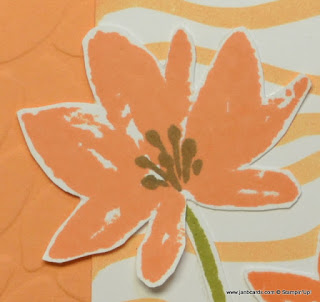 Once I’d finished cutting out all the shapes, I adhered in place
on the stripe Whisper White paper I’d created.

I used some Peekaboo
Peach Ruched Ribbon and tied a bow around near the base, and then I adhered the strip
to the card front using Tombow.

I
took a strip of Whisper White CS that was 7/8″ wide and stamped THANKS
in Soft Suede Ink from the Thankful Thoughts Stamp Set. 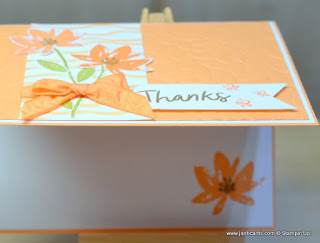 The design of
this card would be suitable for most events e.g. birthdays, get well, etc.

I added three butterflies
from the In the Meadow Stamp Set in Peekaboo Peach Ink.

I fishtailed
the right hand side, rounded the left hand side, and then adhered it
to the card front using Dimensionals.

My
finishing touch was to add a piece of Whisper White CS inside the card
and I stamped a flower head in the same colours as on the front of the
card!

That’s it for today! I’m off to my studio now to make the next batch of swaps! Until tomorrow, happy crafting!