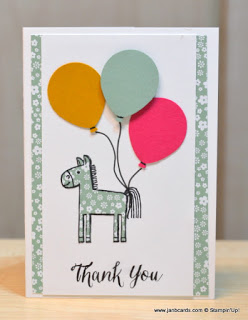 This
morning we’re off to the Gingham Goose Craft Market that’s held in the
Hayes Village Hall.

I’m going to do a make-n-take, which will be
attended by children rather than adults but I have decided to restrict
the lower age limit to 5 years. This is partly because a make-n-take really isn’t suitable for toddlers and today’s card involves using scissors!

All the children need to do is to stamp the THANK YOU at the bottom of the Whisper White Cardstock (CS), and immediately above that stamp the horse. Then the horse needs to be stamped again on a 2″ x 2″ piece of Designer Series Paper (DSP). 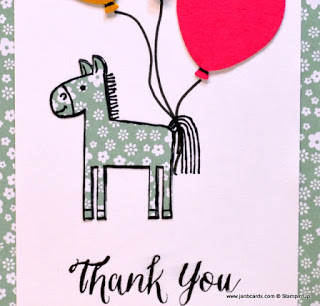 Then they need to cut the horse out, minus his hair and tail, which leaves mainly straight cuts. Once he’s been adhered to the stamped image on the Whisper White CS, they can choose three balloons from a box of ready-punched balloons adhere the two outside ones down with glue stick, and the third one on a Dimensional.

Then they need to draw the string by hand so it looks like they are attached to his tail. 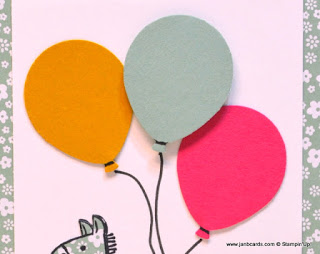 To finish, they need to adhere the image sheet to the DSP, and that onto the card base and they’re finished. The cards are from our Notecards & Envelopes Pack.

I think it’s a great simple card but hubby thinks it’ll take them too long – I think it’ll take ten – fifteen minutes! I’ll let you know tomorrow how it went!

That’s about it for now, as we have to get the car loaded and off. I hope you have a super weekend and until tomorrow, happy crafting.