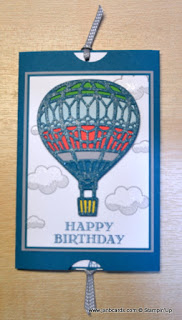 This
morning, I uploaded my video which shows how to make this gorgeous
Double Slider Card.

I first saw this demonstrated in a video by Dawn
Griffiths six or seven years ago.

I made one for me daughter  using the
dressmaker’s dummy die that we had sometime ago.

Double slider cards seem to be enjoying a revival at the moment and there is a new way of making them using Dimensionals to aid the construction.

For my card, I followed the way I knew but I’m quite keen to try this other way as well! 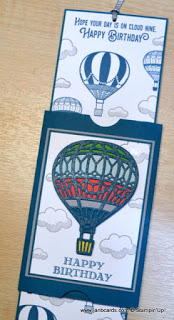 With my first balloon slider card, I made a mistake with the strip of plastic I used, and I think it was an issue only because I had punched finger holes.

I had used a strip of plastic which was mainly clear but did have a small amount of writing on it – it was a Stampin’ Up! clear plastic bag, except it had the logo in one corner, which was the part I used!!

Needless to say, where I adhered my image panels, it allowed the writing to be visible. It’s one of those things that wasn’t glaringly obvious – except to me – but I do point out in the video to use clear plastic!

We had a brilliantly successful day at the Gingham Goose Caft Market yesterday. ☺

Our sales were great; I had a lady asking me about being a Stampin’ Up! demonstrator; and also a possible new customer.

This lady makes and sells soap, and wants to package them in nice boxes. Unfortunately, she has found that buying ready-made boxes is quite expensive!

We chatted about how easy it is to make boxes, colour co-ordination, ect., and what would she need to buy to make her own.

Photographs 4 & 5: when I set up my table yesterday, I decided less was more and restricted the amount of products I had on display.

I don’t know if this helped with the sales, or whether it was because I had new products.

Having said that, I only sold three 3D products and the rest were cards. 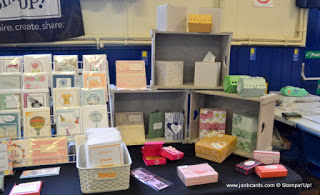 As soon as we arrived, we realised we had left one of my trolleys at home…………the one that had the make-a-take in it.

So hubby had to drive back home and get it. By the time he arrived back at the Village Hall, it was almost lunch time, and we were experiencing a lull.

After the lunch break, we were amazingly busy and I only managed to do one make-n-take with two very delightful sisters! Oh, well. I think that’s next month’s make-n-take sorted – more of the same and already prepped!

That’s about it for today. I wish you a very happy Sunday and happy crafting.