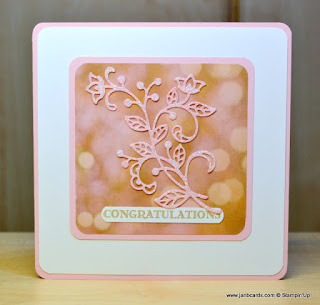 A
week or two ago I said I was going to try and use some of my ready
stamped images, and unused die cuts, rather than leaving them
languishing in their colour coded Ziplock bag!

As I’ve been working a
lot recently with Glimmer Paper, I knew there were quite a lot of unused
die cuts in the Dazzling Diamonds and Red Glimmer Paper bags. 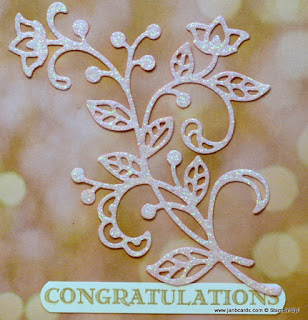 I
tried using red and white and had a nice idea but it wasn’t a complete
card, so it stopped there!

Hubby walked into my studio, and I asked him
if he could inspire me.

He liked the set up with the red Glimmer Paper
die cut, but like me, it stopped there.

I
showed him a picture of a card and told him I wanted to do something
like that but it wouldn’t work with the Dazzling Diamond Glimmer Paper.

That’s when I knew what I was going to do! 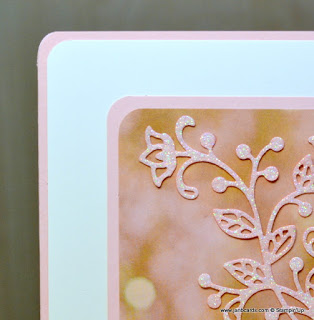 If the die cut wasn’t the
right colour, change it, and that’s exactly what I did.

I’m going to
make a tutorial of how I made today’s card and I’m hoping to have it on
YouTube tomorrow morning.

My
card doesn’t look anything like the card I wanted to CASE but I am
really pleased with the result.

I normally make A6 sized cards but
today’s card is a 6″ x 6″, and I very rarely ever round corners but I
felt this card just screamed out for them.

I
used Pink Pirouette Cardstock (CS) for the base, with a layer of
Whisper White CS, a smaller layer of Pink Pirouette CS, and a top layer
of Falling in Love Designer Series Paper (DSP). 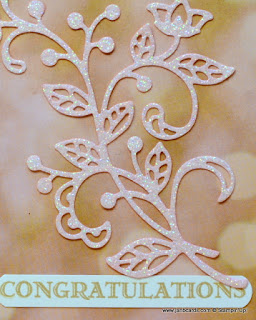 I’m sorry about the bad colour on these photographs, fortunately I’m a better cardmaker than I am a photographer!

The CONGRATULATIONS
sentiment is from Guy Greetings Stamp Set and has been stamped onto a
piece of Whisper White CS using Crumb Cake Ink.

I rounded the ends using
my retired Word Window Punch.

I inserted the sentiment in from the back
so I could see where the rounded edge would punch, and then I turned
the strip around to do the same to the other end.

You can apply this to
any punch that has a curved edge,  for example, a circle punch. 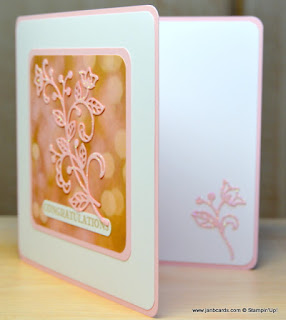 The
smaller sized punch you can use will give you more of a curve.

To
change the colour of my Dazzling Diamonds Glimmer Paper, I spritzed it.

I could have used some Blushing Bride Glimmer Paper but that would have
defeated the object of the exercise i.e. using unused die cuts.

What
surprised me most, is that I used a bottle of spritzer that has been
sitting on my shelf for about four years, and I’d made it using a now
retired colour called Regal Rose.

The result is perfect for Pink
Pirouette. 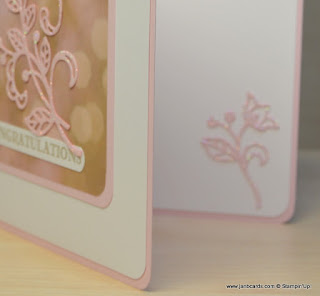 When I go into my studio later today, I’ll be experimenting
with other colours!

Two weeks ago I shared a photograph of my home made Shimmer Spray Catched – see 7th March 2017 – it really came into its own yesterday! LOL!