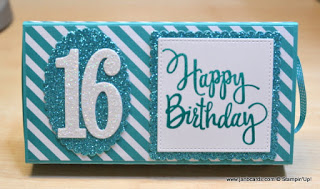 It
was my grandson’s 16th birthday yesterday and I made a Poppin’ Card for
him. I’d never made one before, and I was very pleased with the way it
turned out.

When you pull the tray out, the flattened cube inside pops out and immediately forms itself into a cube – it works brilliantly! 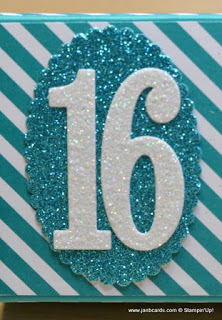 I made a quick 1 minute 9 second video to show how it works
– see above. I don’t know why the box looks green in the video!!

To make Jack’s card, I followed the video on YouTube made by Gemma Clarke –
www.madebygemmacrafts.co.uk.

Gemma’s video was really easy to follow, although I really had to concentrate on what I was doing! 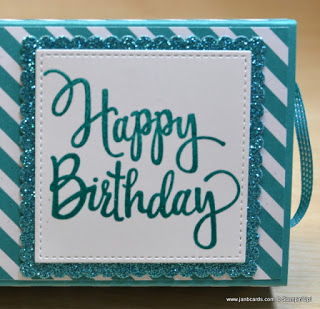 The sentiment is the Stylised Birthday Stamp, which I inked with Versamark, and then Bermuda Bay Ink.

I stamped it onto a piece of Whisper White A4 Thick Cardstock (CS), sprinkled it with Clear Embossing Poder and heat set it. 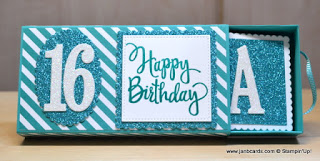 I die cut the image using the Stitched Shape Framlets and layered it onto a piece of Bermuda Bay Glimmer Paper that I’d die cut using the Layering Square dies.

The striped paper is from the Brights Collection Designer Series Paper (DSP) Stack. 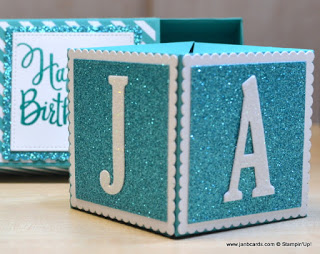 The ribbon I used for the handle is the Bermuda Bay 1/8″ Stitched Ribbon. Gemma has designed the bottom of the box to have double sides. 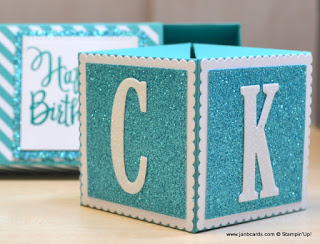 The advantage of this is that it covered up the ends of ribbon – it gives the box such a professional look to it!

Jack was thrilled with his card, and like me, couldn’t stop playing with it!