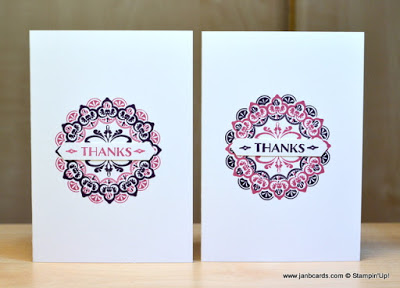 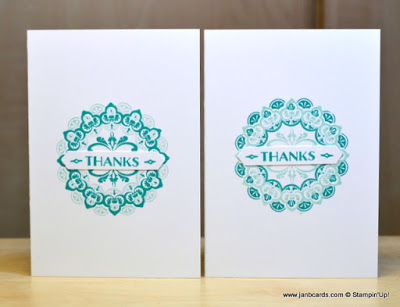 Yesterday
I decided to have a play with the Make a Medallion Stamp Set, that’s
available as one of the new Sale-a-bration (SAB) gifts, until 31st March 2017.

It’s a two-step
stamp set and I decided to use the medallion for this month’s Thank
You cards.

In the centre of the medallion there’s a space to stamp THANKS.

I
started practising on scrap paper with a selection of different colour
combos and settled on Bermuda Bay with Pool party, and Elegant Eggplant
with Sweet Sugarplum!

I’ll refer to these as the blue combo and the
purple combo!

I
decided which stamp I wanted as the light ink and which one for the
dark ink, and that was for the dark ink to do the outside semi-circles. 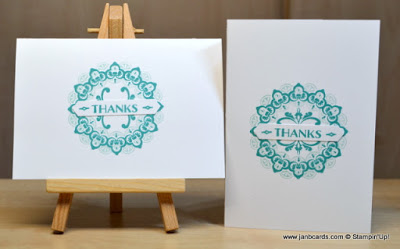 I
did ten in each colour combo and started to think about a third combo,
but I decided to change the colours round and use the lighter ink for
the stamp with the semi-circles on!

WOW! How different they look – see
the first two photographs!

I continued to make more cards with the inks reversed but had to stop as time was running out. 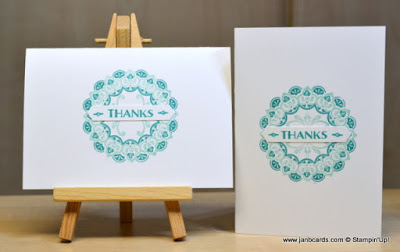 When I
make a mistake stamping directly onto a notecard, I keep the rejected
card to use when I want to add something to the card.

For example, I wanted to add THANKS as a strip across the centre, so I used a rejected notecard. 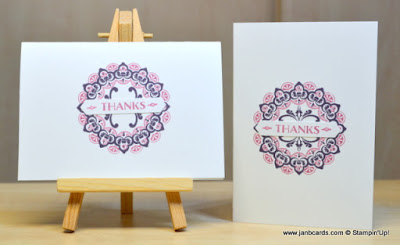 I
stamped the THANKS using Bermuda Bay for the blue combo, and, for the
purple combo, I used the opposite colour to the scrolls in the centre of
the medallion.

As I was adhering these to the card, I decided to do some landscape.

It meant the scolls were still vertical, but I don’t think this detracted from the overall design! 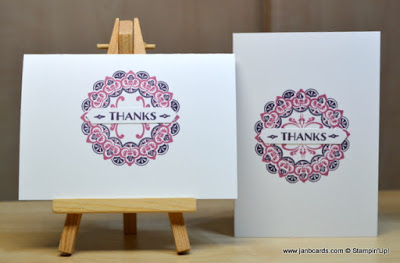 I
allowed myself to get so carried away with the optical illusion, I
forgot to think about an actual design for my card! LOL!

For example maybe a
small decoation in each corner? I’ll think about it over the weekend and
will let you know if I add anything extra!

I hope you have a great weekend.