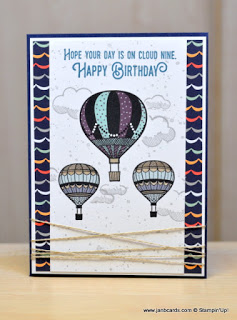 I hope you’ve had a great weekend!

Ours
was delightfully busy, especially yesterday afternoon when I went
through wedding invitation designs with Vicki and Leigh.

It’s all been
decided and I’m pleased to say they’ll be mainly Stampin’ Up!

The
balloon design on today’s card was something I created when I was
designing yesterday’s Double Slider Card. 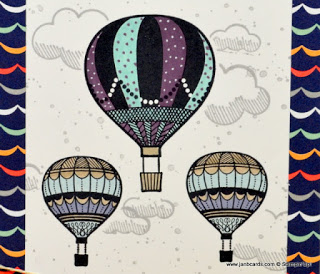 Initially I wanted to stamp
and paint balloons but when I’d finished this I thought I’d overdone the
Gorgeous Grunge Stamp Set splatters.

When I showed hubby he said he
felt it made the balloons look 3D.

I
had kept the images to the top of the Whisper White Cardstock (CS)
because not all of it would be exposed when attached to the Double
Slider mechanism.

I needed something to fill the space but I didn’t
want to add more words.

I decided on the Linen Thread because I feel it
makes a card more masculine.

For the large balloon I used Pool
Party and Perfect Plum, with Crumb cak for the two lower parts. 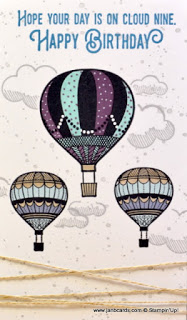 I
also used Pool Party and Crumb Cake for the two small balloons and also
added some Wisteria Wonder.

I added large and small clouds using Smokey
Slate Ink, as well as the splatters.

I layered the image sheet onto a
aheet of the night of Navy design from the Carried Away Designer Series
Paper (DSP) that’s currenty available as a Sale-a-bration gift.

I layered this onto a sheet of Whisper White CS and then onto a Night of Navy CS card base. 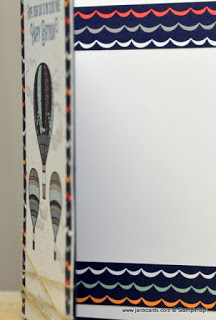 I
also put a layer of Whisper White CS on the inside of the card, and
then I adhered two horizontal strips of the Carried Away DSP , one top
and one bottom!

I was quite pleased with the finished card and so pleased I’d decided to show the image to hubby – his positive resonse really inspired me!