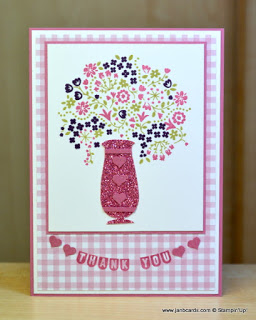 Yesterday
was a lovely day for several reasons!

I was contacted by a friend I
haven’t seen for several years, who said she’s going to be in town on
the 14th and would I like to meet up with her!

I’m so looking forward to
seeing her again.

One of the ladies in my team was promoted to Bronze Elite yesterday – just rewards for all the effort she’s put into building her Stampin’ Up! business! 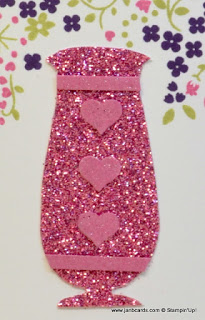 I
also has masses of jobs on my plate that had to be done and I worked my way
through them all!

The biggest job was getting my customer Thank You
gifts packed up and posted – fortunately, this is always a big job! ☺

I was able to get
most of them in the post and the last three were couriered – and all done by yesterday evening!

Hubby
took them down to the post box and the courier, so all my February happy
mail is winging it’s way to my lovely customers, and I still had plenty
of time to play in my studio.

I
chose to use the Thankful Life Stamp Set, which is an hostess stamp
set. 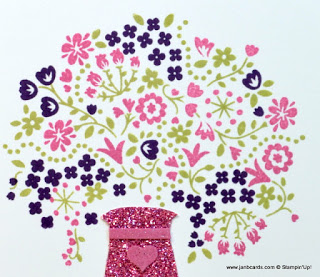 It’s a three step stamping stamp and makes the most divine vase of
flowers!

I started stamping on a scrap of paper so I could work out the
best way to line everything up.

It took me nine goes before I could say
that that I was really happy with it!

At first, I didn’t think this stamp set was
particularly versatile, but looking at the card while I’m writing my blog,
I have an idea for a design – I’ll try and make a card with it
tomorrow.

My top priority for today is to make Jack’s birthday card –
he’ll be 16 today.

We’re all going over to Vicki’s house this evening to
celebrate his birthday! 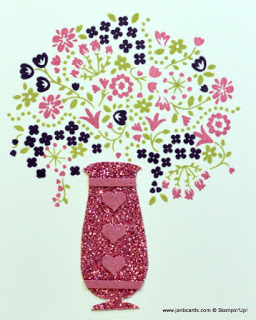 I started my card with a base of Sweet Sugarplum Cardstock (CS), then a layer of Whisper White CS and a top layer from the Succulent Garden Designer Series Paper (DSP).

I stamped the bouquet of flowers on to a piece of Whisper White CS using Pear Pizzazz, Sweet Sugarplum and Elegant Eggpant Ink.

I cut the vase from Sweet Sugarplum Glimmer Paper that’s currently on offer as a Sale-a-bration (SAB) gift, and decorated it with two strips and three hearts made with Sweet Sugarplum CS.

Then I layered the image onto a sheet of Sweet Sugarplum CS – I don’t like this and wouldn’t use the Glimmer Paper again. 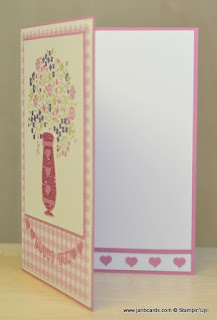 I think the vase is too “heavy” looking for the delicate flowers!

The sentiment is from the SAB stamp set called Any Occasion, and I stamped it using Sweet Sugarplum Ink directly onto the DSP.

I added more hearts to make the sentiment look like a banner hanging from the image!

The hearts were leftovers from using the Hearts Confetti Punch last week!

I adhered a sheet of Whisper White CS inside the card and decorated the lower part using a very fine strip of Sweet Sugarplum CS and seven hearts.

The final touch was to paint over the vase docoations and hearts with my Clear Wink of Stella, but I see I missed the hearts on the inside – I’ll remedy that once I’ve clicked on PUBLISH!