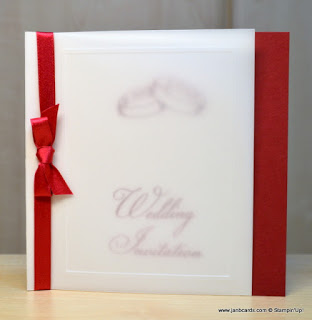 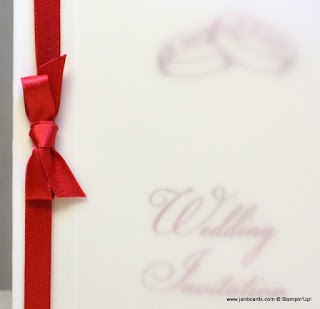 Now
Vicki has sent out her wedding invitations, I’ve been given the go ahead
to share!

You may be surprised at how simple these cards are but
Vicki’s taste is very much like mine, clean and simple!

When Leigh and
Vicki first came round to discuss what they wanted for their
invitations, I explained what the options were and showed some samples
of invitations I’d made for previous weddings.

They decided they’d like a
single fold card, with a vellum overlay on the front and either two or
three pages inside!

They also liked a dry embossed double line rectangle
to go on the vellum to frame the stamping underneath.

They saw this
idea on one of the previous invites but, on that one, it had a parcel
in the middle of it.

I agreed because it’s quite easy to create a dry
embossed rectangle on vellum without the need of an embossing
folder………or so I thought!! 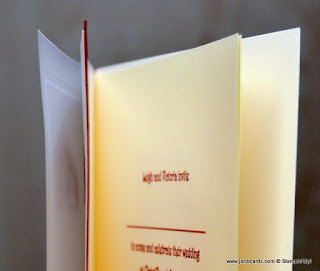 Choosing
the colour was the easiest part because Cherry Cobbler matched the
colour of the men’s bow ties perfectly.

I really needed the Cherry
Cobbler Ribbon that was in the Christmas catalogue as a combo with
Emerald Envy Ribbon.

I
tried Stampin’ Up! first and didn’t haven’t have any joy there. 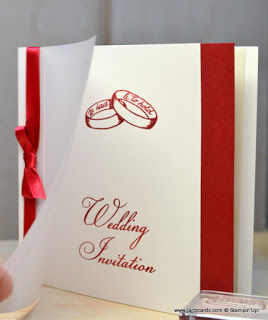 I put a
shout out to other demos via several different Facebook groups I’m in
and only found one person with two partial rolls.

The last resort was my
local art shop who were able to order some for me.

Although the colour
is correct, it’s not perfect like the Stampin’ Up! ribbon would have
been!

The
three pages inside were going to be the invite, the poem and the
directions.

Vicki agreed she’d create the three documents, save them on a
USB stick, so she could bring it over and download onto my laptop.

The
reason we planned it this way was that my laptop is connected to two
printers, and one of them is a laser jet. 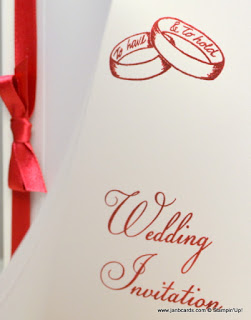 The print quality on this
machine is so much better quality than an inkjet machine!

We also both
felt that by transferring the document from one machine to another via a
USB stick, there wouldn’t be any distortion with the font or the
layout.

The third page was the map but I couldn’t get it to fit without having
to forfeit all the margins, which made it look as if i was squeezing it
in, which was what I was trying to do!

We decided to create the
directions as an A5 flyer rather than a page. 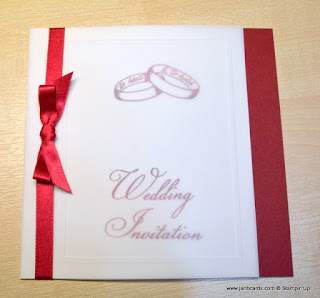 Unfortunately, when I had
been re-arranging the map to fit it as a page, the church moved to the
shopping centre and the car park landed on a block of flats!

I didn’t
notice this, fortunately Vicki picked it up after she had collected the
invites and the flyers!

Thank goodness we decided to do it as a flyer
and not a page!

Leigh
and Vicki chose our Shimmery White Cardstock for the base of their
card, and we agreed that we needed a good quality ivory 120 gsm paper
for the inside pages as we all agreed that white looked too stark. 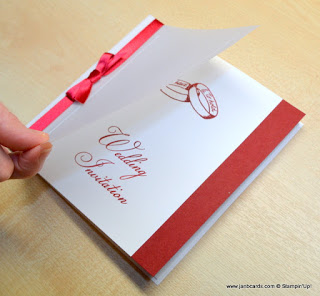 Then
we started planning the decoration on the front of the card, that would
show through the vellum layer.

I showed them all the options available
from SU but as Vicki, unlike her Mum, isn’t all flowers, butterflies and
cutsie things, I moved onto stamps I had from my pre-SU days!

We
found the two intertwined rings with the words “to have and to hold”, and then they
chose WEDDING INVITATION in a lovely fancy font. 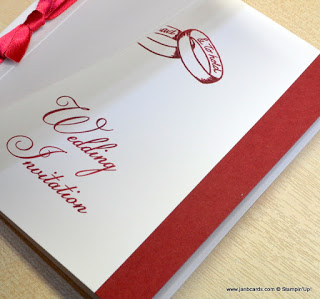 I
showed Leigh and Vicki the difference between stamping in Cherry
Cobbler Ink, and then stamping in Versamark and Cherry Cobbler Ink
combined, sprinkling with Clear Embossing Powder and heat setting.

They
both love the heat embossing!

Unfortunately, the sentiment stamp was
photopolymer and old and started disintegrating after about twenty
impressions.

This was being aggravated by continually washing the stamp
as I was inking it up in Versamark and ink before stamping. 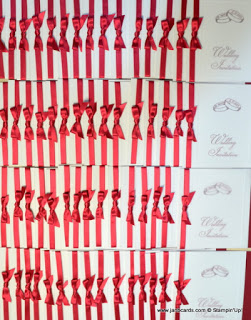 I found
another stamp that was very similar but a much better font and I changed
to stamping with Cherry Cobbler Ink and heat embossing.

I found I was
getting much better results with a truer colour.

When I tried to dry emboss the triangle, I found that the amount of pressure I needed to get good results was causing the vellum to buckle, so I moved onto plan B.

I found the embossing folder that had the outside recatangle around the parcel, and cut the parcel out. 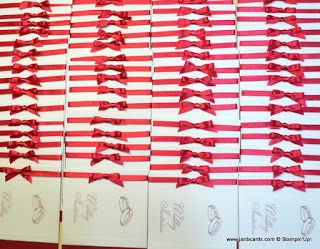 Please let me know if you have any questions, or if I missed anything out!