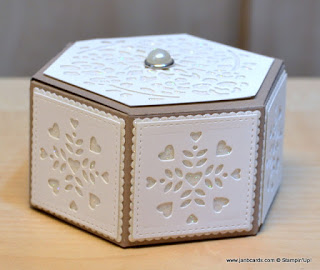 Yesterday evening I had my follow up appointment with my consultant and the good news is that he hasn’t found anything wrong, which is obviously very re-assuring! But it does mean a CT scan and other tests, all of which be done on Monday. ☺

Yesterday,
I decided to have a play with the Window Box Thinlits Dies, and it’s absolutely gorgeous! 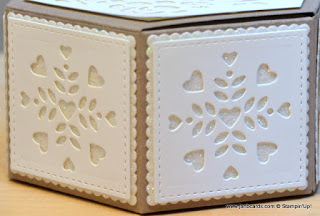 Stampin’ Up! have really excelled themselves with this!

I didn’t
have a fixed project in my mind, I just wanted to see how they went
together, how big the finished box is and how sturdy it is!

I
found putting it together was really very easy, and my usual choice of
glue, Tombow, worked brilliantly. I’m sure SNAIL, Fast Fuse, and Tear
& Tape will all work brilliantly too! 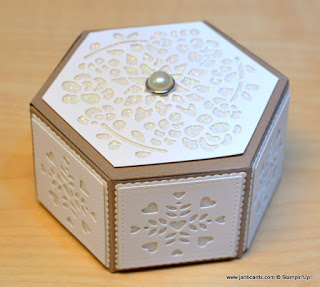 I
love the closure to the box, which was one area that I thought could be
an issue, but if you check out photographs 7 & 8 you can see there are
“tabs” on all sides, some on the top and some on the bottom. This means the lid has support on all sides which will stop it dipping down at the sides. 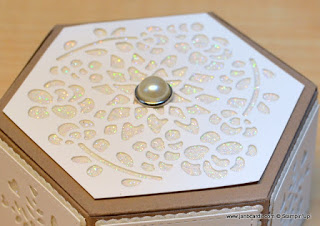 My
only criticism is that, because I’ve decorated all six side panels, I
keep forgetting which side is the front of the box!

As I like the box
decorated on all sides, my choices are to make the front or the back
panel slightly different from the rest e.g. adding a Silver Glimmer Paper heart
in the centre heart, or maybe a Basic Rhinstone in it. 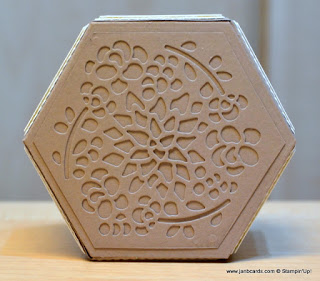 Alternatively, I
could put a discreet mark on the underneath of the box to indicate
either back or front; or maybe put the Metal Rimmed Pearl on the front panel rather than the top; or maybe decorate the top with a flower or butterfly positioned to indicate what’s the back or the front! The ideas are flowing this morning!

I used Tip Top Taupe Cardstock (CS) to create my box and Whisper White CS for the die cuts. Then I used Dazzling Diamonds Glimmer Paper at the back of all the die cuts. 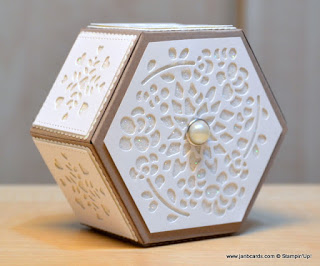 There are three different dies for the side panels; as well as the hearts, there’s one with birthday candles on it and the other one is small circles.

As I was die cutting six of the hearts, I also die cut six of both of these dies at the same time, so I’m ready to decorate the next two boxes! There are also extra dies to give a plainer lid which is far more suitable for men. 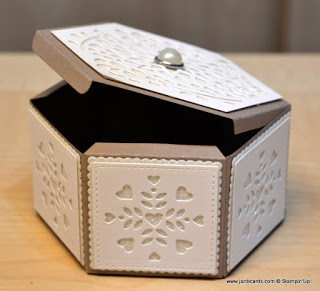 The first box I die cut, I also die cut the design in the actual lid but I decided I prefer the idea of having the patterned part added on top rather than putting a liner inside the box – I hope that makes sense!

Rather than waste the lid, I cut it away from the sides, trimmed off the tabs, and adhered it to the bottom of the box – see photograph 5.

It was a nice finishing touch and makes sure that piece doesn’t get wasted! 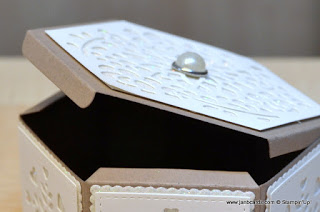 The actual box is made by die cutting two identical pieces, so each piece has one lid and three sides.

This means, if the shapes are die cut directly onto the box sides, the candles and the hearts have to be put up the right way on one half of the box, and turned upside down on the other piece!

Today, I have to get myself organised for my first craft show for this year – it’s the Gingham Goose Craft Market which is held in the Hayes Village Hall.

That’s about it for today. Until tomorrow, happy crafting!