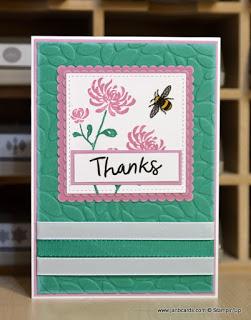 Sponging
has never been a technique that I’ve liked but every now and again, a
project just calls out for it!

Today’s card is one of them.

As I was
working on this project, I remembered a video I made and called it Velvety Flowers.

I chose that name because I’d sponged
the edges of the flower petals and it really did make them look like velvet! 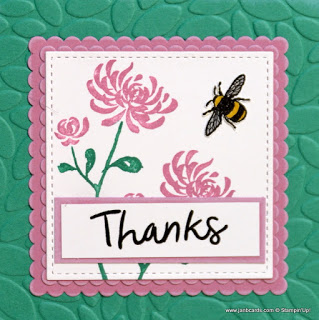 For
today’s card I’ve sponged the edges of the two layers for the flowers,
the main two layers, the sentiment layer and the two coloured layers
inside the card.

I
chose the single flower stamp from the Artistically Asian Stamp Set and
painted it with Marker Pens.

For the two flower heads I used Sweet
Sugarplum and for the stems and leaves I used Emerald Envy – both
colours are from the 2016 – 2018 InColours.

Before I stamped the image
onto a piece of Whisper White Cardstock (CS), I huffed onto the stamp to
make sure it was all still nice and moist.

Then I repeated the process
and stamped the second image off to the right but lower than the first
one.

The
sentiment is from theThankful Thoughts Stamp Set.

Initially, I heat
embossed it in black on the flowers, hence the cover up!

Yes, I made
such a mess of it! 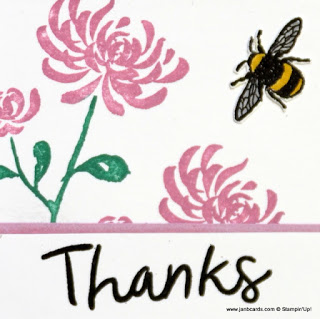 I also heat embossed the bee from the Touches of
Texture Stamp Set.

I coloured the body using my Crushed Curry Marker
Pen, the Smokey Slate Marker Pen for the wings and then painted all over
using my Clear Wink of Stella Glitter Pen.

Finally I fussy cut
the bee, although if I did this card again, I’d do the bee straight onto the Whisper White Cardstock!

After having made a mess with the sentiment, I wasn’t taking any chances with the bee! 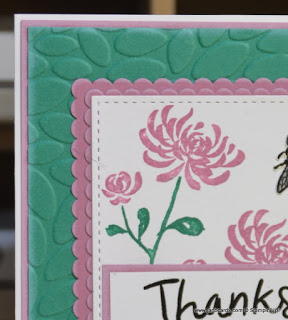 I finished the card with two Whisper White and
one Emerald Green strips of ribbon wrapped around the lower half of the
card.

I experimented with adding some bows but decided against them,
less is more!

Inside the card I added a layer of Sweet Sugaplum, Emerald Envy and Whisper White Cardstock, but I didn’t add any stamping.

All three stamp sets used are for this card are being carried forward into
the new catalogue!

Looking at the finished card now, if I remade it, another change I’d make is to put the sentiment across the three strips of ribbon, not on the flowers! 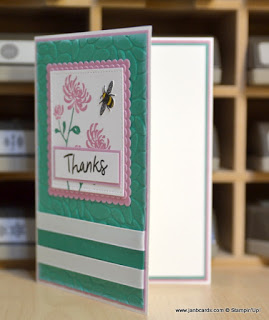