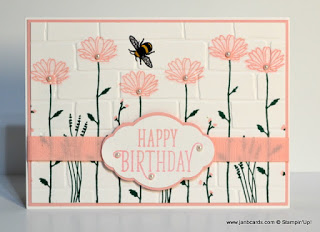 We had a lovely time celebrating Leigh and Sasha’s birthdays yesterday evening.

We all went over to Vicki and Leigh’s (SIL) for a barbecue, and there were also six children, so it was a super family celebration!

We arrived for the barbecue later than expected because my class ran over time, which it invariably does!

They are such great social events, time takes a backseat! ☺

Yesterday
I shared one of the cards we made in class, and it was the second card which inspired today’s video.

I’ll try and remember to photograph it later and share with you tomorrow.

For class I used the Wild About
Flowers – again! but for the video I used the
fabulous new Daisy Delight Stamp Set.

I decided to make a video as it
sometimes takes a bit of working out how to position the second stamp
when doing two-step stamping, and my design uses three of the different
two-step stamps in this set!

I
originally planned to make my card for the video in Powder Pink but
settled on Berry Burst, because it’s such a beautiful deep pink, I knew
it’d be easier to point out various areas on the stamps to illustrate
what I was doing.

There
is one stamp in the set I did with Tranquil Tide for the second-step
stamp because that’s what it looked it should be! 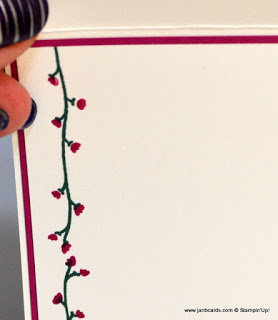 I’m not saying I was
wrong, but today I saw a card someone had made and she had used Wisteria
Wonder for the second-step stamp and it looked really beautiful!

I’m
now converted! In future, it’ll be a flower!

I
also included the bee from the Touches of Textures Stamp Set on my
card, as it seems to be an addition that’s liked by a lot of crafters!

To
decorate inside the card – see photographs 5 and 7 – I
stamped the green stem from the front of the cards that has the little
Berry Burst flowers going down the length of the stem. 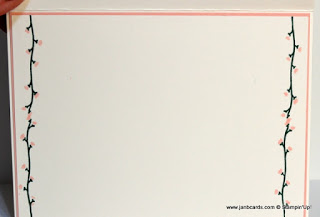 I stamped it
once, halfway down on both sides.

I turned the cardstock upside down and
repeated the process, leaving a very small gapp to allow for the top
flowers.

Strictly speaking, this means the top half is upside down. 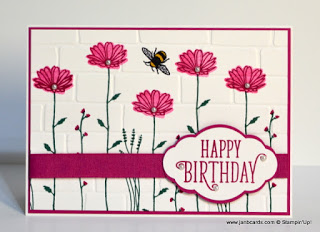 As
the flowers are so small I don’t think it’s an issue, but if you are bothered about it, this can be remedied by covering some of the lower
stem, ink the stamp, remove the cover and then stamp.

As they’re
photopolymer stamps, it’d be easy to line up the second stamp!

I wish you a very blessed Sunday. Until tomorrow, happy crafting.