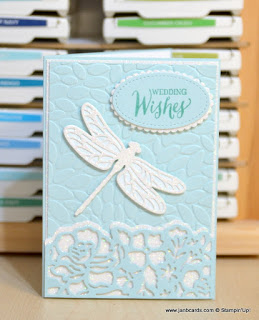 Earlier this morning I
shared the video that shows how I made the pink Dragonfly Wedding card I shared
with you on 3rd April 2017.

In the video I show the card in three colours and
two different styles.

Apart from the original Pink Pirouette card, I’d made one
in Soft Sky and during the video, I made the Tip Top Taupe card. 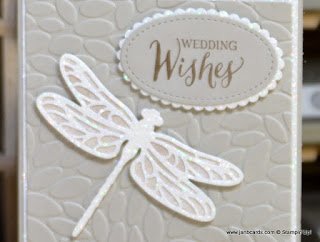 I don’t have a preference with the colour, I
think all three look great.

The variation between
the cards is where I ended the Floral Thinlints die cuts.

On the original card,
I trimmed the die cuts so they ended at the edge of the top layer, thereby leaving
a narrow border of the Dazzling Diamonds Glimmer paper all round.

Before I
started the video, I made the Soft Sky card and allowed the Detailed Floral
Thinlits die cut to come almost to the edge.

Although I think both styles look
great, I prefer this version, even though the all round Dazzling Diamonds
Glimmer Paper edging is lost!

I’ve posted the two photographs next to each other so, hopefully, you can see the difference! ☺