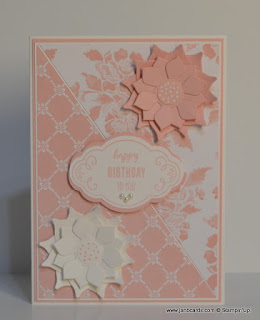 When I
first started playing with the Eastern Palace Suite Bundle, I created
basic die cuts using the Eastern Medallion Thinlits, so I could adhere them to the
cardboard backing in my Die Storage Folder.

I also decided I’d die cut
individal pieces that I’ll keep in a separate Ziplock Bage, so I can mix and match the various pieces when designing a card without
having to actually do the die cut and possible waste cardstock.

As I
working yesterday, I saw one of the die cuts on the side of my desk and it looked
like a flower, which is what led to today’s card!

I
tried a flower in Powder Pink first, and then tried one in Whisper
White.

I used my 1/2″ Circle Punch for the flower centres and was going
to put the pink in the white flower and vice versa. 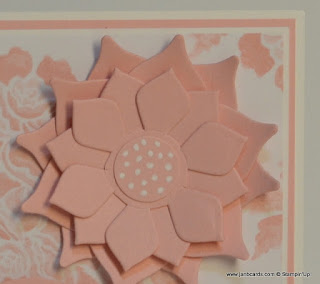 After experimenting,
I decided pink with pink and white with white looked best!

For the
patterned layer, I chose the Fresh Florals Designer Series Paper (DSP)
Stack which comes in the five new 2017 – 2019 InColours. 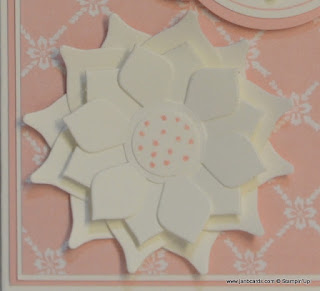 The
designs in this set are the same as four of the designs in the current Floral
Boutique DSP, which is in Night of Navy and Whisper White.

Please note: in the new Annual Catalogue, this is the
only colour family that will have it’s own DSP Stack.

Stampin’ Up! haven’t said anything about introducing more colour families at a later date. Personally, I hope they do, because I’ve found it very useful always
having some DSP in any colour I chose to use.

Please don’t get your
hopes raised about possible future DSP Stacks in colour families, as
these are my thoughts only! 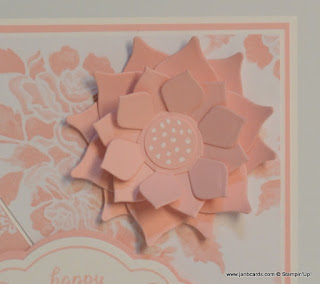 A
couple of other features I’d like to tell you about the Fresh Florals
DSP Stack.

The designs on the sheets have uneven colouring in the
designs because they are colour-washed designs – this is not a fault!

Also, the DSP Stack has not been glued at the top, which means each
sheet is separate, which also applies to the new 6″ x 6″ DSP Stacks,
too. YAY!

I’m so pleased Stampin’ Up! have introduced this because it was
often necessary to pull off pieces of glue that remained on the sheet
pulled off from the pad! 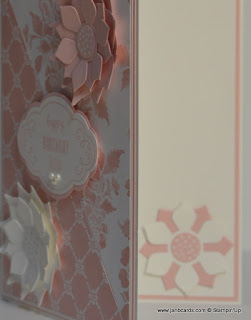 Brilliant move, many thanks, SU! 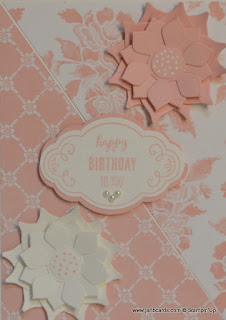 Back
to today’s card! I cut two layers of DSP and cut them diagonally, so I
could have one of each design, and then I adhered all the layers together.

I used
the two dies shown in the last photograph and die cut two of each, in each colour. The die on the left hand side leaves the die cut attached to the cardstock and
needs to be snipped in between each petal to release it.

If you use both these dies
together, the larger die will cut the smaller die cut away from the main
piece of cardstock.

I folded the individual petals up on the smaller die
cuts and curled the other two die cuts using a pencil.

I adhered all
four pieces together, offsetting each pair of die cuts, and I decoarated
each half inch punched circle using a white gel pen for the Powder Pink
circle and the Powder Pink Marker Pen for the Whisper white die cut
circle. I adhered the flowers to the card using Tombow. 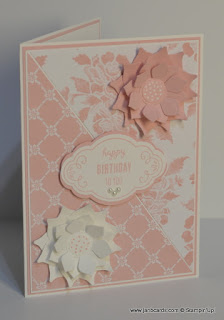 Using
Powder Pink Ink, I stamped the sentiment frame, which is from the Label
Me Pretty Stamp Set, on to a piece of Whisper White CS.

I compiled the
sentiment by stamping three individual stamps, which are from the Tabs for
Everything Stamp Set, inside the sentiment frame. I punched this out
using the Pretty Label Punch, and I also punched another label using Powder
Pink CS, which I cut in half horizontally.

I adhered the halves top and bottom at
the back of the sentiment, and then adhered this to the centre of the card
using Dimensionals, finishing off with three medium Basic Pearls in a cluster.

I
finished my card by adding a layer of Powder Pink CS and a layer of
Whisper White CS on inside, and  decorated it with a flower that was made using
one pink and one white layer of petals. 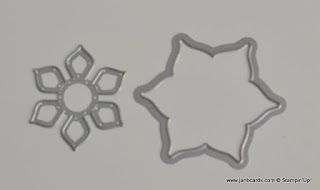 As it’s on the inside of the
card, I didn’t bend the petals forward!

Please note, if you decide to order the Eastern Palace Suite Bundle, the Thinlits are NOT included in the Beginner’s Bundle.