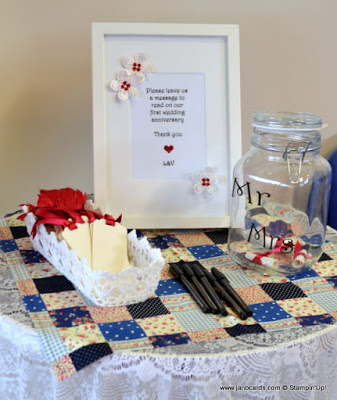 Many thanks to you all for your kind wishes; I will
certainly have pleasure passing them all on to Leigh and Victoria.

I’m
gently floating back down to earth after having spent some wonderful time
on cloud nine.

Yesterday I didn’t have time to go through the photographs hubby took at the
wedding – he took over the responsibility when I gave up i.e. when Vicki arrived! 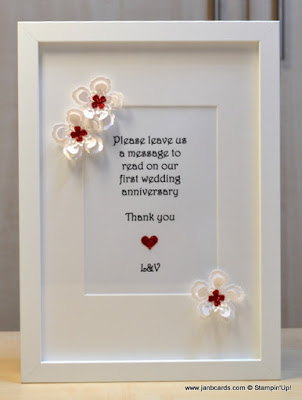 In
case you missed earlier posts about the wedding tags, they were placed on three
different tables in the Church, and all guests were asked to write a
message on one, roll it up as a scroll, tie the ribbon in a double-knot and pop it into a glass jar.

Leigh and Vicki will read them on their first wedding
anniversary! 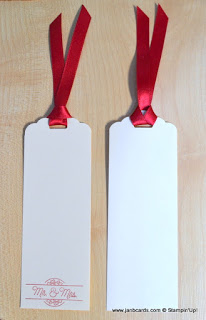 As
I had 260 of them to make, I set up a conveyor belt system which made
it quite a speedy process.

It slowed down quite considerably when I came
to the ribbons, because they all had to be threaded from back to front
with the ends of the two tails with the outside of one tail lined up
against the inside of the second tail.

This produces the kind of loop
used for the Breast Cancer Bow. 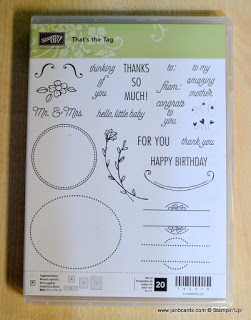 I’m sure there’s a name for it but I
don’t know it.

Then I added one Glue Dot at the front and one at the back, to make sure the ribbon didn’t slip undone.

Photograph 1 – this is the notice Vicki wanted on each table.

She emailed it to me so I could print them via my laptop. Then I framed and decorated them with flowers from the Botanical Builder Dies, using Shimmery White Cardstock.

I added a small flower in Red Glimmer Paper that I’d punched using a retired Stampin’ Up! punch. 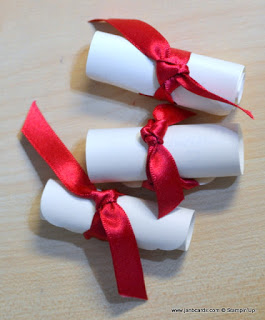 The morning after I’d finished the frames, and photographed them – i.e. on the wedding day! – I decided the red flowers needed a Basic Pearl in the middle.

You can just about see them in photograph 2!

Photograph 2 – one of the tag tables – check out the pearls in the centre of the red flowers.

Photograph 3 – back and front of the tags. On the front of the tag, I slipped a Glue Dot under the straight part of the horizontal ribbon. I used my Paper Piercer and, on occasions, it was a battle of wills trying to make it let go of the Glue Dot! 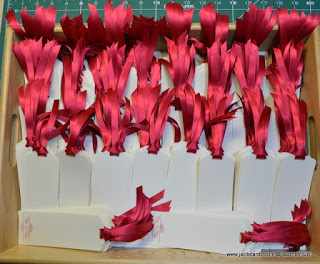 On the back of the tag, I turned the tag round so the ribbon tails were pointing towards me, and used my Paper Piercer to open a gap under the white paper you can just about see peeping through where the ribbon divides.

More often than not, I was then able to put a Glue Dot in the gap very easily and press on the ribbon to make the Paper Piercer let go. By this time, it didn’t have much fight left in it! LOL!

Photograph 4 – the stamp set I used for the stamping That’s the Tag. 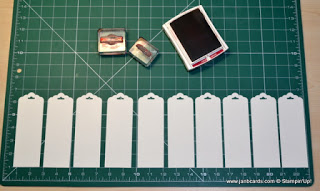 Unfortunately, this is retiring on 31st May 2017 but I’ll be keeping it as I can see it being very useful for wedding stationery.

Photograph 5 – sample tags rolled to show guests what was being requested of them, one for each of three jars. 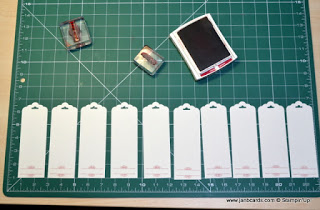 Photograph 7 to 9 – this is my conveyor belt! After I’d cut and punched all the tags, I had to stamp them all, twice!

I used the second to bottom stamp you can see on the right-hand side of the stamp set cover in photograph 4.

Then I had to stamp the Mr & Mrs stamp, third stamp from the top on the left hand side, inside the lines of the first stamped image. 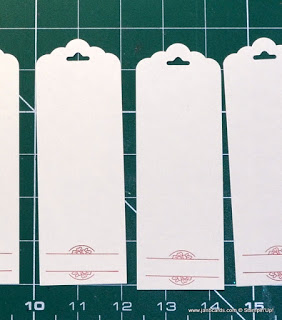 As it’s a photopolmer stamp set, it was a doddle lining it up!

Then I moved the green mat along to stamp the next 3 or 4 tags, and then I moved it again so I could stamp the rest.

At this point, I could have gone back to the beginning and stamped with the second stamp, but I decided to keep it simple and do 260 with one stamp, and then go back to stamp the second stamp. 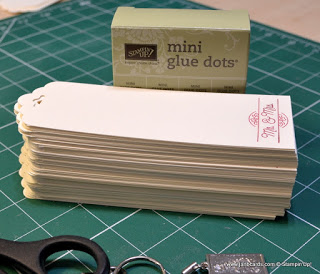 It took a bit longer than the other way would have done, but at least I didn’t make any mistakes!

Photograph 10 – this is what a pile of 120gsm wedding tags looks like, with a box of Glue Dots to give it some dimension!

I think this was a great idea, and look forwad to their reaction when they get to open them on 29th April 2018!

That’s it for today, and until tomorrow, happy crafting.


Error: API requests are being delayed for this account. New posts will not be retrieved.