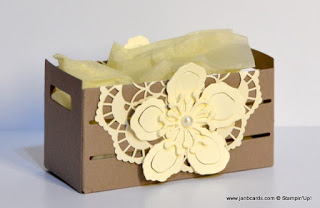 When I
was planning the projects for last weekend’s classes, I was totally
stumped for a 3D project!

In the end I decided to use the Wood Crate
which will be available when the new cataogue goes live on Thursday
this week, 1st June 2017. 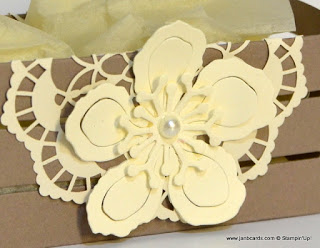 The
ladies loved it and came up with various different ideas what events
they could be used for.

When I eventually made it into my studio
yesterday evening, I carried on where we’d left off!

I concentrated on
decorating the crates but I can see people coming up with some wonderful
ideas over the coming weeks and months for projects other than crates! 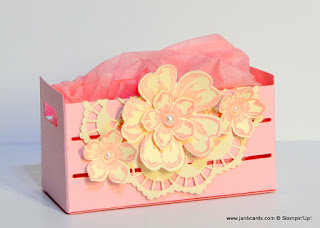 I have one idea I’m working on,
which I’ll tell you about if it’s successful, or at least half
successful! LOL!

In the past month I have tried not to use products that are retiring.

Some of the decorations I’ve used on the crates were already made and I decided to use them before it’s too late! 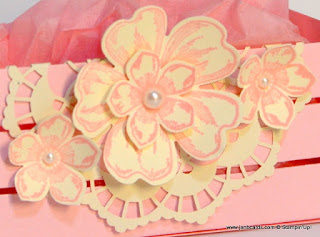 Photographs 1 – 2 – this crate was made with Tip Top Taupe Cardstock (CS). The doily is one of the Falling in Love Lace Doilies. I trimmed it so there was just enough to fold over the top of the box but not enough to be seen through the gap between the first two planks of wood.

The flower was from Botanical Builder Framelits die cut in Very Vanilla CS. Both the doilies and the dies are retiring on 31st May 2017. 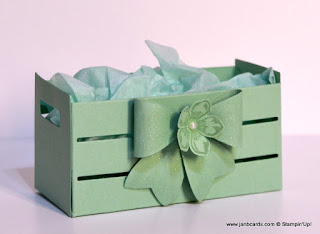 Photographs 3 – 4 – this crate was made with Pink Pirouette CS, and decorated as above with the doily. The large flower, which is from the Flower Shop Stamp Set, was stamped in Pink Pirouette Ink on Very Vanilla CS, and punched out with the Pansy Punch. 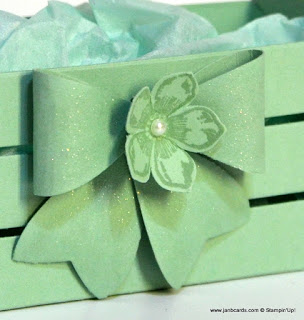 Photographs 5 – 6: this crate was made with Mint Macaroon, which, like Tip Top Taupe, is one of the 2015 – 2017 InColours that will be retiring at the end of this month. I made the bow using Mint Macaroon CS and the Bow Punch.

To create a slight difference in the colour of the bow, I painted it with the Clear Wink of Stella Glitter Pen. You can see the sparkle in photograph no. 6. I adhered one of the small flowers (which is the same as the photographs 3 & 4) in the centre of the bow. 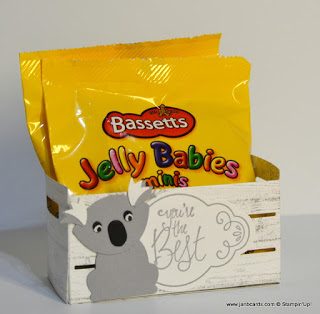 Photograph 7 – to make this crate I took some Whisper White CS, and stamped it with the Woodgrain Stamp that I had inked with Smokey Slate Ink and stamped off once. I was really pleased with how this crate turned out and think it could be used as a wedding favour! I stamped the sentiment and the frame – two separate stamps – onto Whisper White CS using Smokey Slate Ink.

The stamp set is a new one called Label Me Pretty and has a co-ordinating punch called Pretty Label Punch. The koala was left over from some Christmas Cards I made last year and was made using Smokey Slate CS and the Fox Builder Punch. I think crates like this with these types of sweets in would be ideal for children’s parties or school fetes! 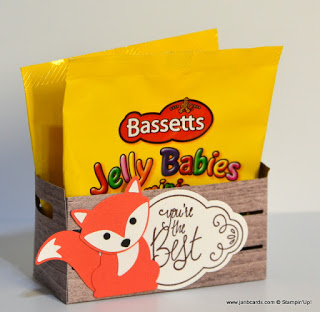 Note: Stampin’ Up! have stopped having glue added to paper stacks! YAY! This means, no more checking each sheet to make sure there’s not any glue still adhered to the DSP. Thank you SU!

The sentiment was created in the same way as photograph 7, as were the foxes, except I used Calypso Coral CS. The sentiments and frames for these two cards were stamped using Chocolate Chip Ink. 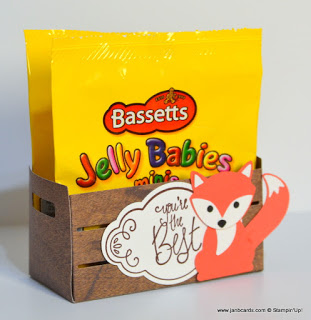 As well as crates, I have seen cards made by crafters where they’ve used the front of the crates, and sometimes a very small amount of of the sides, and then put carrots, flowers or kittens in the box!

That’s about it from me today. Until tomorrow, happy cafting.