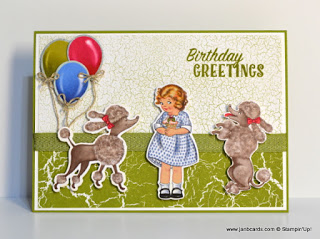 Yesterday
I used some of the die cuts I made from the the Birthday Memories
Designer Series Paper (DSP) to create today’s card!

The only idea I had was
that I wanted the little girl, who’s protectively guarding her cake from the
dog begging on the right-hand side, and the more snooty looking dog on the
left-hand side! LOL! 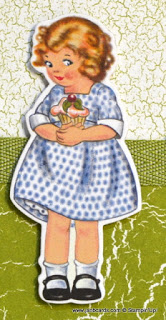 These characters are just so unbelievably cute!

I
started my card with a base of Old Olive Cardstock (CS), and a layer of
Whisper White CS.

My first thought was to create a garden scene and put
the images at the front. I decided I didn’t want the card front be
so busy that the focal point was lost.

I chose to use the beautiful
Colour Theory Designer Series Paper (DSP) Stack. I absolutely love the
crackle designs in this stack! 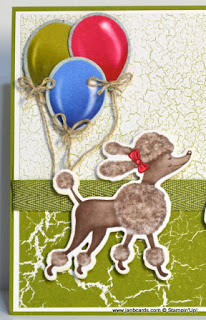 I
debated whether to use the Dapper Blue design to represent the sky, or Olive Green to
co-ordinate with the bottom section which represents grass. Co-ordination won the
day!

I adhered a wide strip of the white background crackle paper the
the top part of the Whisper White CS, and a narrower strip of the solid
green background to the bottom part.

I
wrapped a piece of the Old Olive 3/8″ Mini Chevron Ribbon around the
join of the two designs and adhered it at the back of the Whisper White
CS.

I was very pleasantly surprised at how amazingly soft this ribbon is! 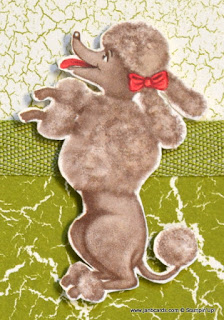 When I first looked at it on the roll, I thought it looked quite thick and quite coarse – it’s neither!

The
little girl and the standing dog images were die cuts from the DSP, but
I wanted to put them on Dimensionals over the ribbon.

I was concerned
they would be too flexible to do this, so I adhered each of them to the
stamped die cuts I shared with you on Saturday.

This idea worked
brilliantly, but I had a problem with the begging dog! I had fussy cut
this image from the DSP as there isn’t a die for it.

To get round this, I
cut roughly around another image of the begging dog on the DSP and
adhered it to a piece of Whisper White CS. Then I fussy cut the dog and
backing in one go! 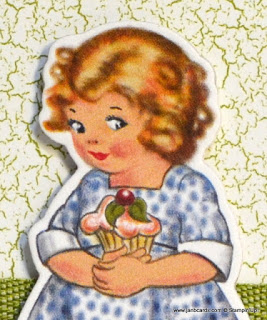 My
idea worked and I was able to adhere all three images in place using
Dimensionals!

I added the three balloons using Dimensionals, but I
didn’t add any backing to them. I felt that, because I had overlapped them,
and I’d also used three Dimesionals, there was sufficient support already.

I made
three tiny bows using Linen Thread, and adhered one to each balloon
using Tombow. Then I added a piece of string to each balloon, and
adhered the ends behind the ribbon. 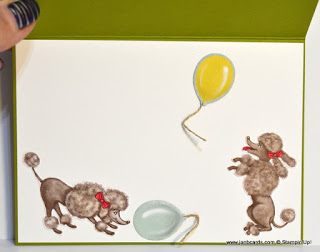 To
decorate the inside of the card, I adhered a piece of Whisper White CS
and adhered two fussy cut dogs, each playing with a balloon!