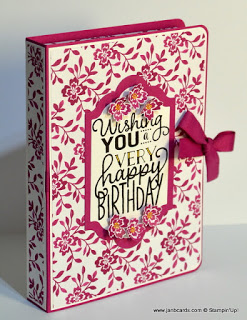 Earlier this morning, I posted my video showing how to make a Book Box.

I’ve put a birthday greeting on the front so it can be used as a combined birthday card and gift box.

If I was to give this to someone as such,  I’d decorate a gift bag to put the card box in.

The size of the box is suitable to hold five or six A6 (A2) greeting cards and envelopes which would make a super gift.

When the cards have been used, the recipient has a nice box they can use for whatever.

When I made the video, I’d forgotten that our  new 12″ x 12″ cardstock comes in each colour family, but just three of the colours.

I have suggested that Soft Sky can be used and have also suggested a Soft Sky Ribbon that will be ideal to go with it. 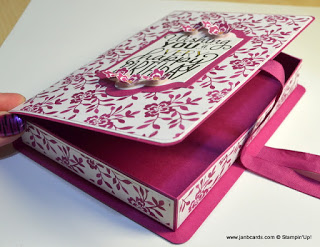 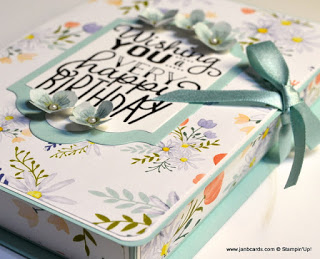 We’re enjoying a heatwave here which started yesterday, the day of the Warlingham Village Fair!
The event was brilliant, very well attended and plenty of action
going on in the arena.
On the down side, visitors weren’t really in the mood to
spend money, so our sales were poor. 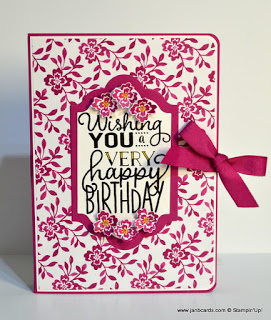 Fortunately we covered the cost of our
stall, plus some.
For me, it’s not all about instant sales.
I have two possible
invitations for the future.
The first was from a lady who is starting a new
venture where people can go to learn various crafts.
She has the venue sorted
out, and now she’s looking for teachers of various crafts, including
cardmaking! 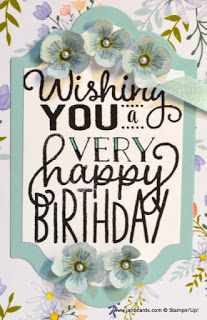 The second person who may get back to me is a lady whose daughter
is getting married in September.
The lady and her two friends were really taken
by two of my gift boxes, which they felt would be great as wedding favours!
This is Window Box and this is the Wedding Favour Box.
Unfortunately, about half an
hour from the fair closing, one of the stewards had an accident in the arena.
We don’t have an details about what happened except to say he was hospitalised.
I wish you a very happy Sunday.
Until tomorrow, happy crafting.
JanB.