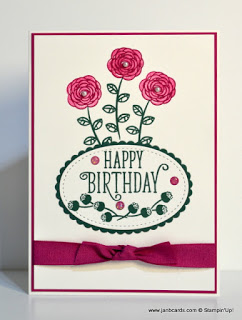 Yesterday’s
launch day went without any hitches, and I’ve just had notification that
one of my orders, as well as two of my customers’ orders, have shipped
already!! Well done Stampin’ Up! You’re far better than brilliant!!

My
day yesterday was amazingly busy, and I wasn’t able to make it into my studio
until early evening!

I wasn’t sure which of the new stamp sets I wanted
to have a play with, and decided on Happy Birthday Gorgeous. 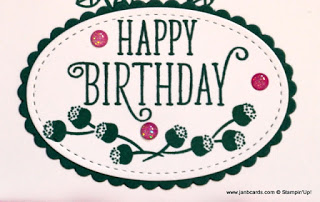 This is such a super stamp set, with various sentiments in a fabulous font! It’s
available as a bundle with the gorgeous HAPPY BIRTHDAY die, which I used
for my card two days ago.

I love using two-step stamping and tested
some of the elements of this stamp set on scrap paper. 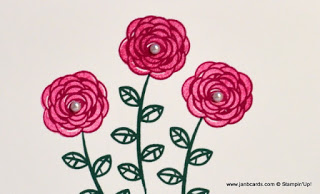 The two main
outline flowers – one large and one small – are beautiful and the solid
stamps fit into the outline perfectly, easily!

I tried the little
branch with the berries and the stem with the leaves; they’re both
gorgeous!

Slowly, slowly an idea developed in my mind as I played with the various elements in this stamp set, and I’m happy with the clean, almost simple card I finished up with. 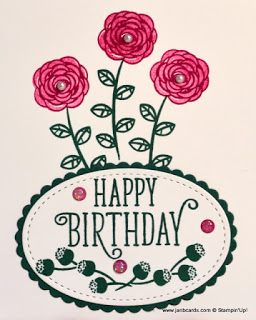 I took a small
oblong of Whisper White CS and stamped the sentiment using Tranquil
Tide Ink. I thought about a circle of berries going round sentiment, and
tested the idea on a scrap of paper.

I dismissed the idea as I thought it looked rather
crowded, so I tried it with the two branches crossing each other below
the sentiment, which I really liked! I
re-did them on the Whisper White CS that I’d stamped the sentiment on. 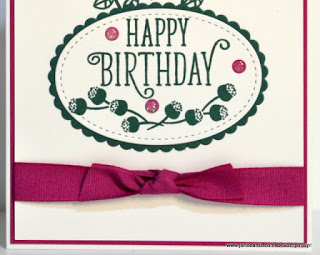 To die cut the sentiment, I tried the Circle Stitched Shape Framelit but
it didn’t fit well enough, so I changed to the ovals which looked as if it had been made for the job! I die cut a larger scallop circle using the Layering Oval
Framelits and Tranquil Tide CS.

I
decided I wanted to have three flowers rising from behind the
sentiment. I placed the sentiment oval on the card front and drew a
faint line round it so I’d have a guide where to stamp the flower stems. 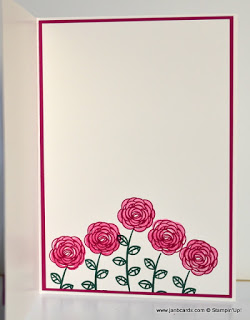 I stamped three at varying heights using Tranquil Tide Ink, and erased the pencil mark before I went too far, and forgot about it!

Then I used
Berry Burst Ink to stamp three of the large outline flower heads at the top of
the stems. For the inside of the flowers, I stamped off once, and then finished off with a
medium Basic Pearl in the centre of each flower head.

I
adhered the sentiment in place and then a piece of Berry Burst Ribbon
wrapped around the top layer only. 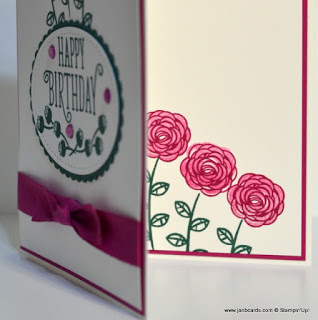 Using Tombow, I attached the card
layers together, and tied a short piece of ribbon as a knot around the
strip I’d adhered around the top layer.

I added three of the new Glitter
Enamel Dots around the sentiment, just to give it a bit of a pop of
colour!

To
decorate the inside of the card, I used a layer of Berry Burst CS, and
then a layer of Whisper White CS.
Before I adhered the layers into the
card, I stamped five more flowers with the tallest in the centre, and
working out to the smallest.