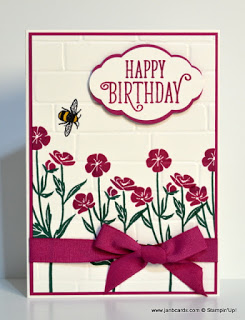 The new 2017 Annual Catalogue is LIVE! As I was up early this
morning, I decided to place my order which I had ready and waiting. It
was all plain sailing and the only four items on my list that couldn’t
be ordered because of shipping delays were the Decorative Ribbon Punch,
the Starburst Punch, the 2.25″ Circle Punch, and the Circle Tab Punch. I
am one very happy bunny!!

A
few days ago, I promised to share the two-step stamping and Brick Wall
card we did in classes over the weekend. This was an alternative to the
card I made in my video on Sunday. I felt that for all of us to stamp
three different flowers multiple times with just one stamp set between
us would have taken forever. 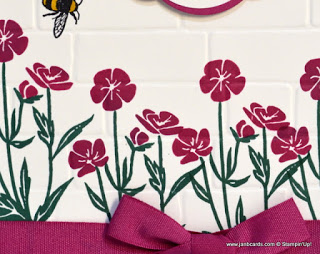 Needless to say I used the Wild About Flowers Stamp Set for this card and the colour is the new Berry Burst. 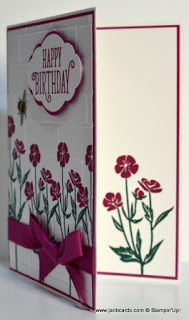 The third
idea was from subscriber Lilette Autrey who credits Gayner Boyce with this
tip. She recommends cutting a twelve inch paper “ruler” from a sheet of
grid paper, and adhering it to the top of the vertical ruler, to convert my centimetres to inches! This is the tip I’ll be
following, but if you’re happy with your inches or centimetres, either
of the first two would be brilliant! 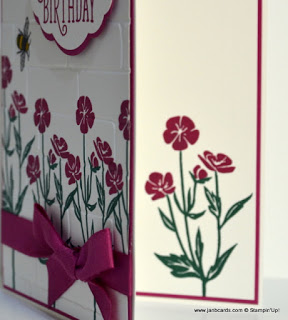 Lilette
shared another tip with me recently when she saw me struggle on another of
my videos! I can’t remember which video it was, but I needed to score or
cut a piece of Designer Series Paper that wasn’t wide enough to hold
outside the vertical ruler. Lilette suggested adding a Post It Note to
it to make it wider and therefore easy to hold. Again so simple but oh
so effective. I should have thought about this because this is what I do
if I try and punch something that’s too small to hold! Many thanks for sharing your tips Lilette, Debbie and Deb!