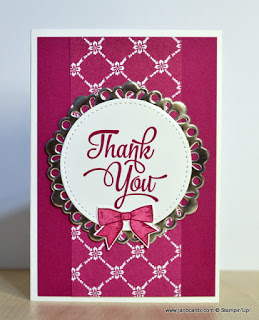 I hope you’ve enjoyed your weekend.

Yesterday
was a busy day for me as I had the second class of the weekend, and
there was a lot of clearing up to do after all my ladies had left!

I
don’t know where it came from, but I seemed to get an abundance of
energy from somewhere!

I
spent some time catching up with emails, and responding to comments on
YouTube about the A Little
Wild Baby Card video I uploaded yesterday. 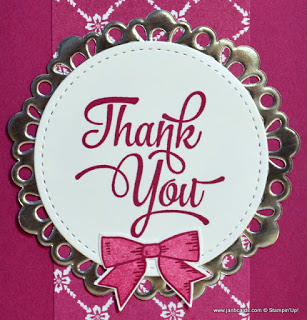 Then I decided to work on my June customers’ Thank You
cards, and in next to no time I’d made them all!

I ran
out of our gold and silver Metallic Doilies, so I moved onto the retired
Lace Doilies from the Spring Catalogue which retired on 31st. May,
2017.

For my Thank You cards,I
used one design, and three different colour schemes!

The idea was
inspired by a card I saw in the Stampin’ Up! Demonstrators’ magazine,
called Stampin’ Success. 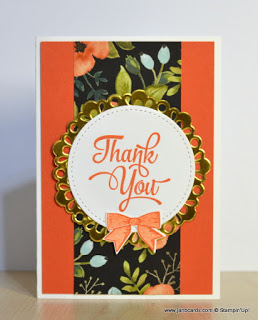 The first card I made was the Berry Burst card,
then the Tangerine Tango, and then the Fresh Fig with the Lace
Doilies.

As
usual, I used our Notecards & Envelopes, and added a layer of
cardstock, that was a quarter of an inch smaller than the 5″ x 3.5″.

I adhered a piece of the Fresh Florals Designer Series
Paper Stack, which was the same length as the Berry Burst Cardstock, and
2″ wide.

I stamped the sentiment, which is from the One Big Meaning
Stamp Set, onto a piece of Whisper White Cardstock, using Berry Burst
Ink.

I die cut the sentiment using the Stitched Shaped Framelits, and
adhered it to a silver Metallic Doily. 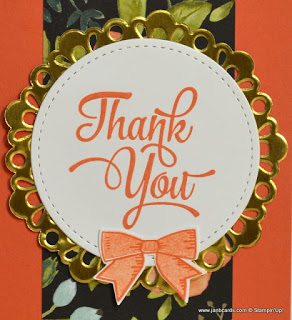 The
bow is from the Holly Berry Happines Stamp Set which has been brought
forward from last year. YAY!

I stamped the outline stamp onto a piece of
Whisper White cardstock, using Berry Burst Ink.

Then I used the
solid second-step stamp, using Berry Burst Ink stamped off once.

I punched the
bow out using the Holly Berry Builder Punch.

Then I adhered all the
elements in place. 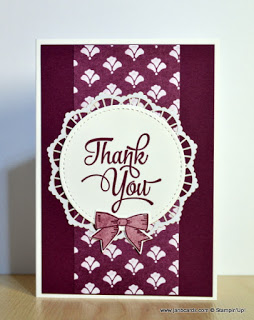 I started to look for a suitable Designer Series
Paper design that I thought would look good with the gold Metallic Doilies.

The
Designer Series Paper I chose is called Whole Lot of Lovely, which I
paired with Tangerine Tango Cardstock.

I think these two together make a
very vibrant card!

When
I ran out of the gold doilies, I chose Fresh Fig to go with the white
Lace Doilies. 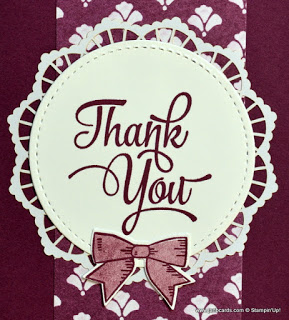 For the Designer Series Paper, I used another design from
the Fresh Florals Stack that I’d used for the Berry Burst design.

I
don’t normally put that much into my Thank You cards, but I was so
pleased with the design, and I seemed to have an
such abundance of energy, that once I’d started, I didn’t want to stop!

I’m really pleased with the end result and this
card was a real pleasure to make! 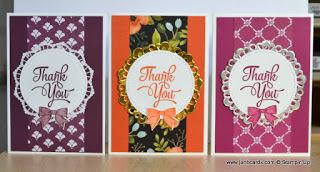