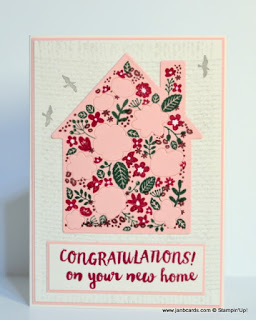 Yesterday
was another of those amazingly busy days where I achieved a lot, but not
much crafting! Apart from that, it was such a satisfying day.

There’s a lot of re-organising that I have to do when there’s a new
catalogue launched – out with the old, in with the new!.

To start with, I go through all my stamp sets and pull out the
retired ones. These were marked with a coloured dot as soon as the
Retiring List was published. I also marked the retiring embossing
folders and dies, too. 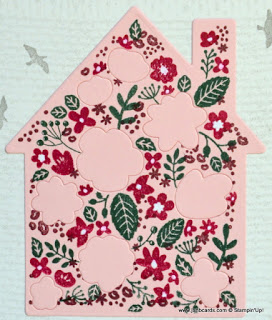 I go through all these retired products and
decide which ones I want to keep and which ones I’ll be selling. I keep
most of the dies and embossing folders but only about 15% of the stamp
sets. When I get the time, I have 120 stamp sets to photograph and sell – which is
no five minute job!

If you live in the UK, the Netherlands, France,
Germany or Austria, and are looking for a particular stamp set, you’re
very welcome to check with me to see if it’s on my list. Email:
janb@janbcards.com.

Today’s
card is the first card I’ve made using any of the products that arrived on
Tuesday. The stamp sets are Home Life and Burlap. I also used the bird
from the carried forward Wherever You Go Stamp Set. 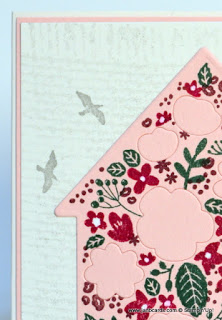 I
love the Burlap background stamp! I inked it with Smokey Slate Ink
and then stamped off before being stamped onto the top layer of Shimmery
White Cardstock (CS).

I
played with the house using various combinations but always sticking to
the same colour combination. These were Berry Burst Ink for the large
flowers that would be die cut and saved for another project; Fresh Fig
Ink for the small flowers and dots; Tranquil Tide for the leaves. I also
kept to stamping on Powder Pink CS.

To create this card, I stamped all
three stamps, which are numbered on the acetate sheets, and then I used
the outline house die and the flower/house die.

Then I took another
piece of Powder Pink CS and die cut just the flowers. I adhered the
house onto the Burlap-stamped layer and adhered the plain flowers into
the gaps.

It
took me a little while to arrange the two sentiment stamps onto one of
the long blocks. I put the  CONGRATULATIONS stamp, which is curved, on
the block first. Then I adhered the ON YOUR NEW HOME, which is straight,
under the first stamp. I did my best to make it follow the line of the
first stamp. It was a bit of a challenge, but I did get a modicum of
success. 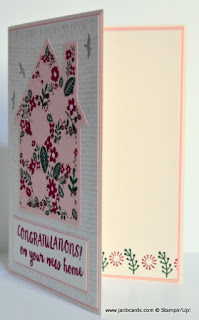 I adhered all the elements together and felt the card looked rather bland. That’s when I decided I’d add three birds! Finally, I used my white gel pen to colour the centres of the flowers. I don’t think it adds much, but I’d certainly include it in future.

Earlier,
I said the three house stamps are numbered on the acetate. So far I
haven’t found a way of lining up the three layers perfectly, but I suspect they weren’t intended to! I’ve found, for
me, it works best if I stamp no. 2 first, then no. 1 and finally no. 3.

I
do finish up with flowers and leaves overlapping slightly, but nothing
major, and I suspect, nothing that’s going to be noticed either! Had you
noticed before I pointed it out? If you did, did it look wrong? As
always, I’ll be interested in your feedback.

Finally, I decorated the inside of my card by using Berry Burst Ink and Tranquil Tide Ink, and two of the small stamps in this set. 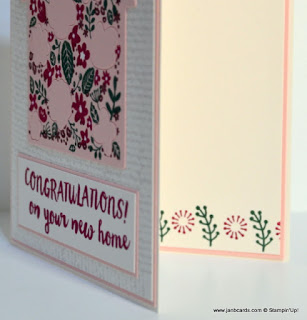 That’s about it today. I’m off to do more re-organising i.e. new dies to go into my new filing system! Until tomorrow, happy crafting.