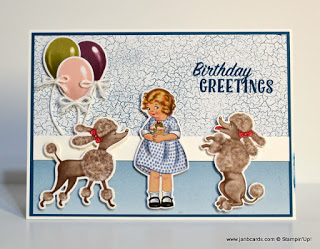 Earlier
this morning I posted my video which I’ve called Poodles & Cake!
I’m getting a lot of pleasure playing with the Birthday Memories Suite!

The first card I shared here last Monday was the card I made using Old
Olive.

When I came to making a Dapper Denim card for the video, I
switched the colours around. 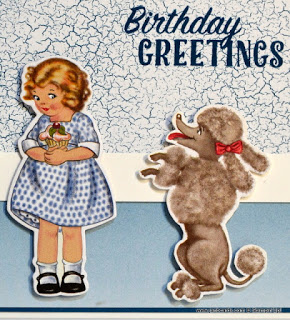 I had a Whisper White Card Base instead
of Old Olive, and used Dapper Denim for the second layer instead of the
Whisper White.

I much prefer it this way round as the card has a far
more definite frame.

Apart
from this, I only made some minor changes.

For example, I used Linen
Thread for the string and bows initially, but changed to Solid White
Baker’s Twine for the video.

I experimented using cardstock instead of
ribbon across the centre of the card as I only have retired Dapper Denim
Ribbon. 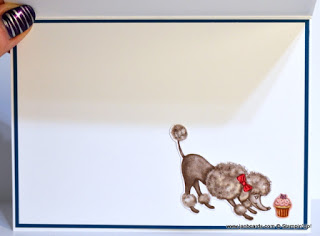 In the Products & Measurements in the box under the video, I
have included the details of the current Dapper Blue ribbon.

The
disadvantage of using a cardstock strip across the centre of the card
was that the unevenness of the join of the two layers of DSP under the
strip could be seen. 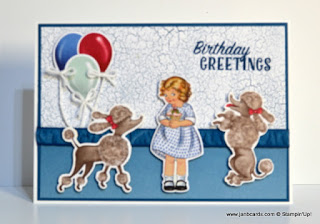 I don’t think it would have been so obvious had I
used a strip of Dapper Denim CS.

To cover the unevenness of the white
strip, I adhered another strip on top of the original strip!

I
had an accident on the Dapper Denim card I made before the video, and
managed to get some Dapper Denim Ink on the right-hand side edge, which
went through to the inside of the card! 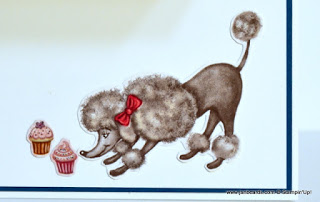 To sort this out, I’ll cut off
all the white edges, and adhere to a new card base!

That’s it for today. I wish you a blessed Sunday. Until tomorrow, happy crafting.