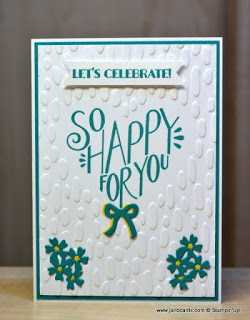 I had
a successful day yesterday and made two of the five videos I need before I
fly to Thailand on Saturday. Yesterday evening I was creating today’s
card, and in my mind’s eye I designed my swap for Thailand, which gives
me the third of five videos!

I’ve
had two new embossing folders I haven’t used yet sitting on my desk for
a little while. I decided to play with the one called Sweethearts. This
is more or less an all over design except for an non-embossed heart.
I’ve often wondered if the stamps from the stamp set called Born To Be
Loved would fit in the heart. I’ve also wondered, if the stamps do fit,
do they have to be stamped before of after embossing? 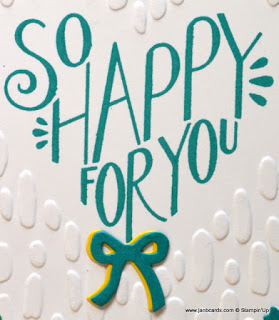 I
decided to try the embossing first, and prepared my stamp-a-ma-jig for
the stamping. The first sheet I embossed had a few tiny “splits” in the
areas that had been embossed! This is a problem I often have with my Big
Shot, but it’s easily remedied! I cut a piece of Stampin’ Up! Vellum
Cardstock (CS) that measured 6″ x 6″, and put a line of Fast Fuse along
one edge. I put the vellum inside the embossing folder with the Fast
Fuse closest to the fold, facing the name Sizzix. I took another piece
of Whisper White CS and ran it through my Big Shot. Perfection!

Using Bermuda Bay Ink, and my Stamp-a-ma-jig, I stamped
the sentiment SO HAPPY FOR YOU in the middle of the non-embossed heart.
It worked a dream! I was really pleased but the card looked incomplete. I
knew I was a bit limited with my options because the card front had
been dry embossed, which ruled out stamping. That left me with die
cutting, or stamping plus die cutting. I chose the Bouquet Bunch
Framelits because the set included dies for flowers and also had a
co-ordinating stamp set called Beautiful Bouquet. 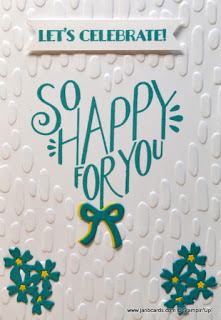 I
die cut the cluster of four flowers, and a bow, using Bermuda Bay CS.
Once all the die cut bits were removed, the flowers were left with
star-holes in the flower centres. I die cut another set in Daffodil
Delight CS and wanted to take the yellow centres to put them in the
Bermuda Bay flowers. As the bits were so tiny, I decided to use a small
square of the Sizzix Multipurpose Adhesive Sheet. I removed the top
protective sheet to reveal the amazingly sticky layer, and adhered the
Bermuda Bay flowers on top. I carefully picked up the Daffodil Delight
die cut, and laid it on top of the Bermuda Bay flowers. Once the two
sets of flowers were lined up perfectly, I used my paper piercer to push
the centres out of the yellow flowers, down onto the exposed sticky
centres of the blue flowers! It worked a charm, but then came the sticky
bit! I covered the blue flowers with the top sheet I’d removed from the
small adghesive square and rubbed all over it to make sure it was
adhered down completely! 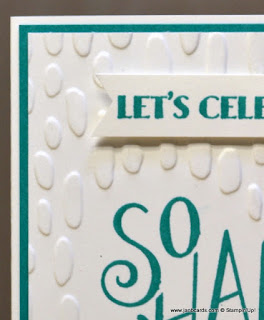 Then
I removed the cover sheet and lifted the blue flowers with my tweezers.
There were “webs of fine glue “sheets” between the cut-outs, which I
removed with my Papr Piercer. It didn’t take too much to remove the
sticky bits but it was a bit messy. Apart from that, it did an excellent
job………..so I did a second set for the left hand corner of my
card! I also die cut a yellow bow, so I could offset it with the blue bow so a small amount of yellow was showing through like a shadow.

My
final touch was to add the LETS CELEBRATE sentiment. I didn’t line the
inside of this card because now the front is finished I thought it looked a bit of a mish-mash,
but I changed my mind when I looked at it again this morning! The best part of this card is it’s helped me plan my Thailand swap card which
will be anything but a mish-mash! LOL! Watch this space.

That’s about it for today. I’m off to the hairdressers now and it’s only 8.30am! Until tomorrow, happy crafting.