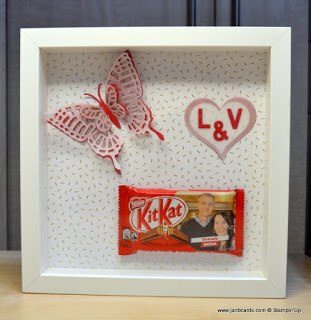 Yesterday
evening we went over to Leigh and Vicki’s for dinner, and had a super
time with them and four of our grandchildren.

I’m not sure where my daughter’s
cooking skills come from – it certainly isn’t me!

Today I have
one, possibly two, grandchildren coming over to help me with several jobs I never seem to have time to do, and which stay constantly on the back burner! 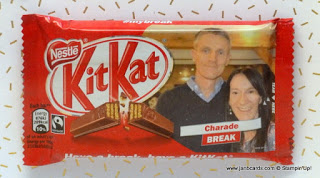 I have the added bonus of having the
grandchildren to myself for the day! No, I’m not selfish – I just love them to
bits! ☺

Yesterday
evening we took with us some small gifts we’d bought back from Thailand for
each of them. We also took over this KitKat home decor frame for Leigh
and Vicki. 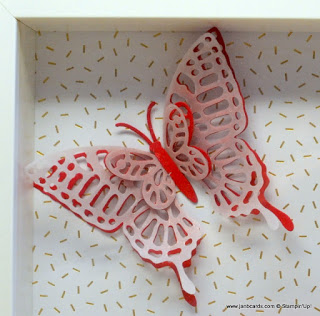 At the beginning of the year KitKat did a special promotion
where you could win a KitKat with your photograph on the wrapper.

You
could also choose what word/s to have above the word BREAK. Hubby won four times!

We decided to have one made for Leigh and Vicki, with a photograph taken just
after he’d proposed last Christmas Day.

As Leigh
proposed during a game of charades, the word we chose had to be Charade! 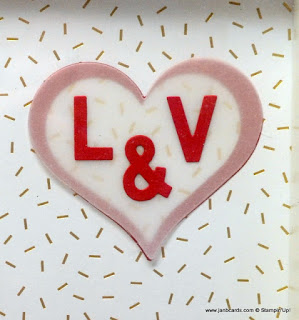 It goes without saying that I couldn’t just give them a KitKat, I had
to make it into a home decor project.

The frame is from IKEA and is what I believe is called a box frame.

I used a sheet of the now retired Pop of Pink Specialty Designer Series Paper (DSP) for the background, and adhered the KitKat with several Glue Dots.

The reason I chose to put this at the bottom of the frame, and then work my design around it, was in case the Glue Dots didn’t hold the weight of the KitKat. As  I made this quite some time ago, and it’s still in place, the Glue Dots are doing an amazing job! 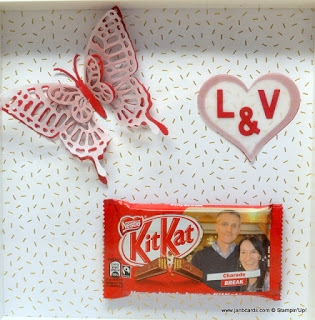 I did one of each in in Real Red Cardstock(CS) and one in Vellum CS, and layered them on top of each other by adhering them with Tombow along the bodies.

Then I die cut the large butterfly from the Bold Butterfly Framelits in Real Red CS, and cut out the body.

I adhered this on top of the layered butterflies, and then added antennae made from the bow in the Mini Treat Bag Thinlits. 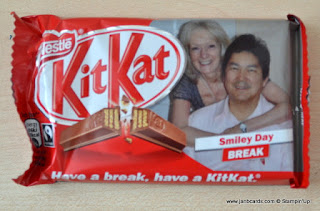 For the Real Red heart frame and Vellum CS hearts I used the now retired Sweet & Sassy
Framelits. The letters are from the Little Letters and Little Numbers Dies both of which are also retired.

Photograph 6: hubby and me!

Photograph 7: No prizes for guessing that Puss is one of hubby’s pet names for me, as well as Pussycat. 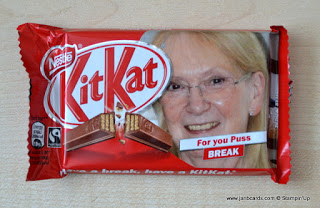