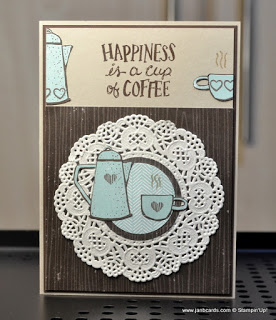 I hope you’ve all enjoyed a great weekend.

Yesterday
I had a play with the Coffee Break Designer Series Paper (DSP) for the
first time.

I was motivated by my desire to try the Multipurpose
Adhesive Sheets (MAS) I demonstrated in yesterday’s video, because I wanted to
know what it’s like to use for small images that had been fussy cut!

I
fussy cut them both, excluding the steam above the cup, because I’d decided I’d
draw some lines on at the end, using my Crumb Cake Marker Pen. 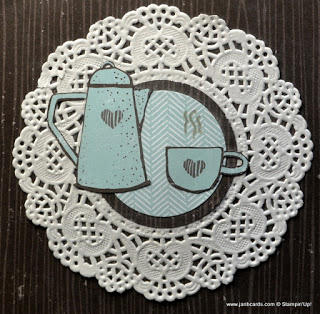 I played around with the design of my card until I’d decided on the
layout, which also included a part coffee pot and part cup for the top
section on either side of the sentiment.

Both these images were on the
edge of the DSP already, which is where the idea came from!

I fussy cut the two
partial images and was ready to have a go with the MAS.

I took one of
the small scraps I’d said in yesterday’s video I’d keep, because I’m sure
they’d come in handy for something!! 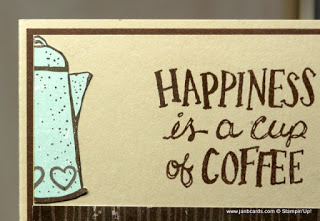 I lifted one corner of one of the
protective sheets – it doesn’t matter which side you use for this!

I
laid my four images, right side facing up, down on the sticky side of the MAS, and then I laid the
protective sheet back down to cover the images.

Using my Bone Folder, I gave the images a good rub over to ensure all the back of the image was cavered with adhesive. 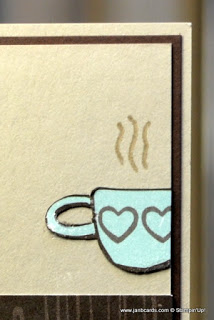 I put that to
one side while I prepared my card base, which started with Sahara Sand
Cardstock (CS).

Using Tombow, I adhered a layer of Early Espresso CS, and then a top
layer of Sahara Sand.

Then I adhered a 3 7/8″ square of the Early Espresson
Wood-effect DSP to the lower section of the top layer, and adhered a Delicate White Doily in the centre.

I used our 1″ circle punch to punch a circle in the Soft Sky design from the DSP, and layered it on a 1.25″ circle from the Early Espresso Bark design DSP.

Then I covered the
bottom part of the stamp which reads HAPPINESS is a cup of COFFEE
shared with a FRIEND, with some sticky tape to block out the bottom three lines of the sentiment. 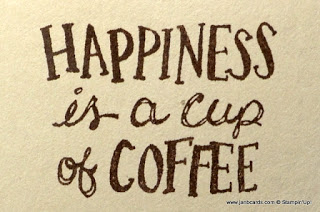 I inked the stamp in Early Espresso Ink, removed the
tape and stamped the top three inked lines of the sentiment, half way between
the top of the card and the top of the wood-grain effect DSP.

I
returned to the piece of MAS that had my four images inside. 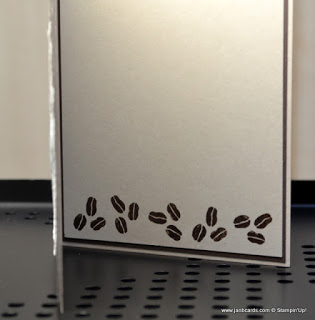 I
lifted the protective sheet, and then used  my tweezers to pick up the
part-coffee pot first!

It came away from the sheet easily but with several stringy bits of glue.

Some of which came away with the pot and some that pinged
back onto the master sheet!

All I needed to do was to remove the stringy
bits, which are amazingly sticky.

Having said that, it was very easy to
remove them from my fingers; I think it was probably easier than removing Tombow from
my fingers! 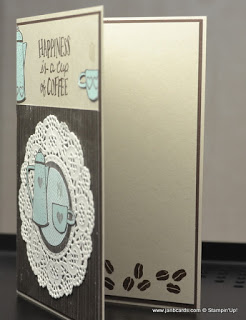 I wasn’t really paying enough attention to stringy bits, but I will do next
time!

I placed the part-coffee pot in place and then lifted the other
three images, and adhered them in place.

It was lovely knowing that the complete  images were
adhered onto my card front 100%!

I stamped Early Espresso hearts – both stamps from the Coffee Cafe Stamp Set – onto the pots and cups, just to add a little bit of interest!

I
will definitely use the MAS again for small images but I still need to
try using it with intricate die cuts that have a lot of cut outs in
them. 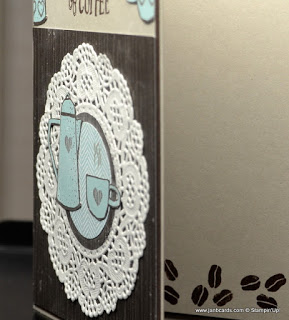 I know we used to sell this product a few years ago, but I never tried it at that time, so I’m self-teaching at the moment!

I’ll be really interested to hear any hints and tips anyone has about this great product we’re offering again!