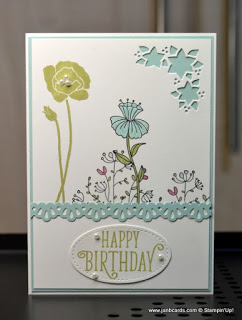 If
you’ve ever wondered if I ever make cards that just do not work out at
all, today’s card proves yes I do get it totally wrong sometimes!

Today’s card is one of those that, if I’d had more time yesterday, I
wouldn’t be sharing it with you now, because I would have re-done it!
LOL!

I
did consider put a Designer Series Paper flag strip over the poppy, but
it would have looked like what it was i.e. me covering up a mistake!

If
I were to re-make this card, I’d omit the green poppy and add some more
Flirty Flowers in it’s place. 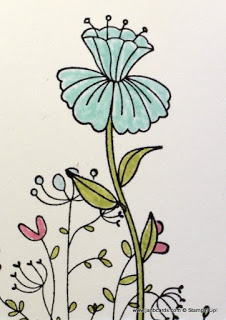 I would also use Pool party Ink for the
sentiment, and I would have finished up with a card that I was happy
with!

One
of my ideas was to use one of the corner dies from the Card Front
Builder Thinlits, to show that this set of dies will work all year
round, not just at Christmas.

If it’s used with summer flowers as I have
done here, the die cut flowers don’t particularly look like
poinsetties!

I love the way the die cut flowers pull in the Pool Party
Cardstock (CS) layer, too.

I stamped the image again onto a piece of PostIt Note and fussy cut it. 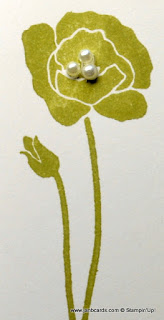 I used it to cover the stamped image on my card front, and then stamped the clusters of line drawn flowers twice, once just to the left of the image and then once to the right.

Using Marker Pens I coloured the bell flower, and the bobble flowers in Pool Party, then the three “heart shaped” flowers in Sweet Sugarplum, and then all the leaves in Pear Pizzazz!

Photograph 3: the Pear Pizzazz poppy that sticks out like a sore thumb! I added the pearls in the centre, hoping it would help the poppy blend in a bit! Fat chance!! 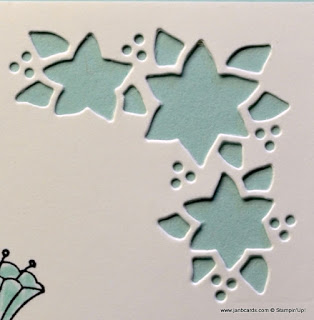 Photograph 4: I used one of the two corner dies from the Card Front Builder Thinlits to demonstrate that these dies will be useful all year, not just for Christmas.

On their own, I don’t think they look particularly like poinsettias – what do you think?

I like how the cut outs bring together the Pool Party of the lower layer, as well as the punched trim above the sentiment.

I used Pear Pizzazz Ink to try and tie the poppy in with the rest of the card!

Likewise, I added some Basic Pearls to the sentiment for the sma e  reason!

Photograph 7: to decorate the inside of the card I took a layer of Whisper White CS, and stamped three single bell flowers at decreasing heights. 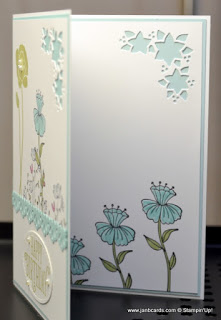 As I said earlier, without the green poppy, I’d have been happy with today’s card!