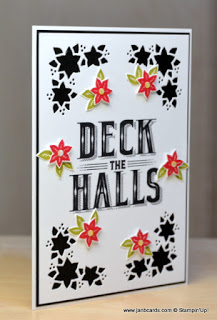 Hello Crafters.
Yesterday was amazing!
When we
booked new carpeting for the house, the salesman said they’d allow two days for
the job!
Three fitters arrived at 10 am and were all done by 2 pm!
They were
three very charming men, who were polite, worked diligently and
professionally, and were so understanding about my studio!
When they arrived, I explained to the
young man in charge that I needed him to do the main bedroom first, so we could
empty my studio into there while they worked on other rooms. 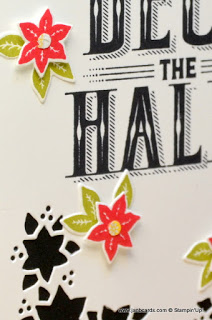 Although we’d nearly
finished, we were still clearing my studio when he came back and said he needed
to do my room!
I explained we’d run out of space to put my desk, which was
still covered with masses of bits and pieces, as well as one unit.
He took a
look and said “No worries; I can work round that!” and he did!
I’m
pleased to say my studio is 90% back to normal, but I’m making the most of the
upheaval to have a re-organistation, too! 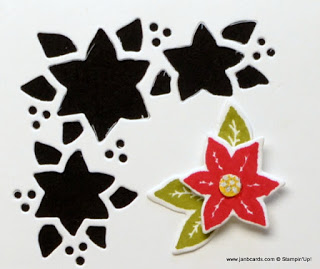 The following is the blog I was
going to share with you yesterday, but everything happened so quickly, I didn’t
have time!
Today’s card is another card
using the pre-release stamp set Carols of Christmas Stamp Set and Card Front
Builder Thinlits Dies!
I wasn’t sure whether to use
Basic Black as my main colour or Old Olive, and I’m not sure I made the right
decision!
I started with a card base of Whisper White Cardstock (CS), a layer
of Basic Black CS and a top layer of Whisper White CS. 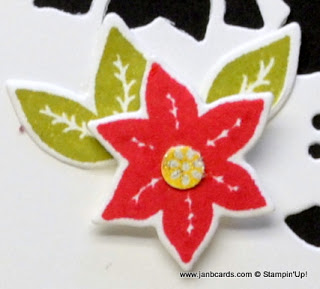 I used the two corner
dies to die cut the top two corners, and then the bottom two corners.
I’m so
pleased we have two dies rather than just one for the corners!
I used my Stamp-a-ma-jig to make
sure my sentiment was straight and in the centre of my top layer.
Using Whisper White CS, I stamped
the poinsettia’s using Real Red Ink and the leaves using Old Olive Ink.

The large poinsettia in one of the corner dies can be used to die cut the flowers but it takes a bit to work
out which one!
I don’t think the two largest flowers on the corner dies are
identical, but I’ll be happy to be corrected on that if you don’t agree with
me! 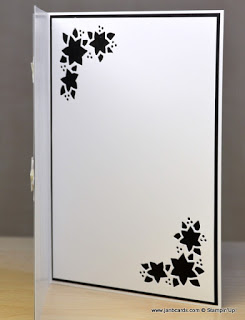 I found the die which worked beautifully was the one with Sizzix
number on the left hand side by the corner of the die.
I adhered the poinsetties randomly around the sentiment using Dimensionals.
Then I adhered the the leaves – one single and one double – in various positions around each individual flower.
I wanted to put yellow centres in the poinsettia and tried several options.
I settled on using my hand-held 1/8″ circle punch, and punched out several of the small Daffodil Delight flowers from the floral design of the retired Designer Series Paper Stack. 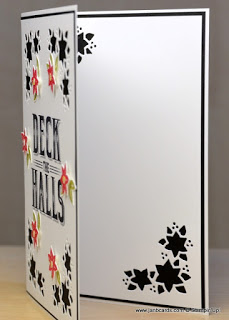 Unfortunately, I then went over them using my Clear Wink of Dtella Glitter Pen which has made the white “dots” look less definite!
One of the options I tried, but dismissed, was I punched out circles from splatter stamps from Timeless Textures and also Touches of Texture, both stamped in Daffodil Yellow ink.
That was too hit and miss so I tried using a Marker Pen to put yellow dots onto Whisper White punched circles.
I also tried plain Daffodil Yellow CS punched circles.
To finish my card, I punched a layer of Whisper White CS in two corners using the corner die. 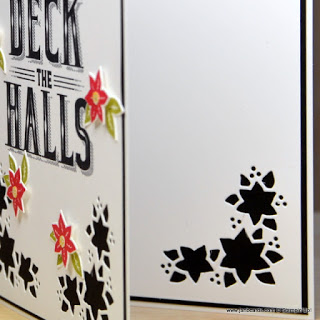 I layered this onto a layer of Basic Black CS, and adhered this inside my card.
I’m now off to finish getting my studio straight!
Until tomorrow, happy crafting.
JanB.