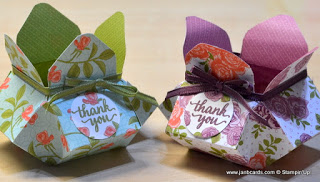 I fell
in love with this box as soon as I saw it!

It was featured on YouTube by a lady
called Shelley Roberts back in 2014.

Shelley credited Sam Hammond –
Pootles – as the designer of this box.

It’s not often I actually sit and watch videos; if I have my iPad on, it’s normally just for a bit of company! Does anybody else do that? 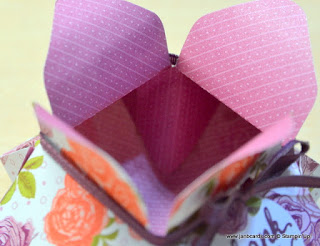 Anyway, Shelley’s video stopped me in my tracks, and I sat there glued!

After I’d finished watching
Shelley’s video, I watched Sam’s version, during which Sam said she has
no idea how she came up with this idea!

All I can say is I’m so pleased
she did as I think it’s stunning.

Since I first saw Shelley’s video
three days ago, I haven’t stopped making these boxes! 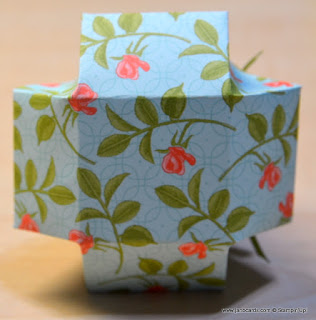 It’s extremely
rare that I think Designer Series Paper (DSP) is a good idea for boxes,
but this box is amazingly strong, and it’s ideal for DSP!

This is because the way the corners are fixed together.

Photograph 2 shows the inside of one of the corners, and you can see how the layers have re-inforced the original tab.

I think you might need to make one of these boxes to fully appreciate the technical side of the construction. 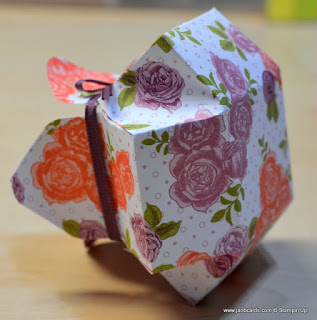 Photograph 3 shows the box from the base which really helps to appreciate the beauty of this project.

Photograph 4 shows the side of the box and clearly shows the beautifully smooth, curved corner

Photograph 5 shows the second box I made.

As usual, I use retired products when I first start working on new projects.

I can’t remember what this Designer Series Paper was called but all the designs were in Whisper White and either Sahara Sand or possibly Tip Top Taupe!

There are plenty of ways these boxes could be decorated.

The two boxes I made using the Petal Garden Designer Series Paper Stack were embellished with a simple Thank You sentiment.

I used the stamp from the Eastern Beauty Stamp Set and punched it out using a 1″ Circle Punch.

As something a bit different, I decorated the Whisper White Cardstock (CS) sentiment with some little flowers I’d fussy cut from an identical sheet of the DSP stack.

I didn’t think about decorating the two Christmas boxes as I’m not into full swing for Christmas yet!

However, I did make two red and white boxes using the same sheet of Quilted Christmas DSP Stack.

I reversed the two sheets to show how different the same design paper can look!

I’m off to the hairdressers this morning so I must dash. Until tomorrow, happy crafting.